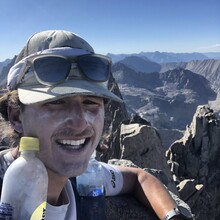 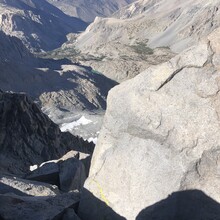 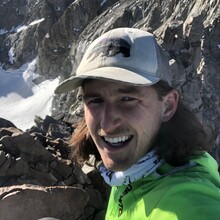 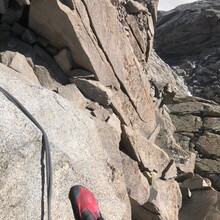 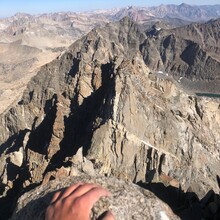 *First off, apologies for the excessive verification links. I thought starting my watch on each peak would be smart and save battery. Turns out it is just really annoying to look through! I think between the GPX file and strava data every peak has GPS data but if I can do anything to further improve the validity of this FKT attempt please let me know!

I've been obsessed with this FKT since reading about Andy Gohlich's absolutely brilliant concept in 2018. I tried it once in 2019 and failed, but saw Ryan Tetz on his FKT effort at Pinchot pass. Ryan is an amazing Sierra athlete!

I tried twice in 2020, once north to south and once south to north. I failed both times. On each of the three attempts Mt. Russell was the last mountain I summitted. With the solstice and full moon lining up so well in 2021 I decided to go for it, but also decided this was the last attempt. Norman's has prevented me from doing other fun stuff in the mountains and the obsession was becoming too much.

Went unsupported on each attempt including this one because it is o fun to just go into the mountains with everything you need on your back and also because stashing re-supplies on this route is quite the logistical challenge. Carried all my gear with me the full way and accepted no food or aid from anyone. Started at south lake, knocking out the Thunderbolt to Sill traversw in about 8 hours. As in other attempts, I just soloed everything, including thunderbolt (5.9) and starlight (5.4). I brought a pair of rock shoes in lieu of rope for peace of mind. The no rope was an aesthetic choice, I just think it makes the unsupported style feasible and cool! on the traverse I had a little trouble with the large notch in between Starlight and North Pal, and then started looking for the Clyde variation to early coming off North Pal instead of just downclimbing the 5.4 chimney so it wasn't my cleanest run in the palisades.

Bopped on over to Middle Pal pretty uneventfully for the Farquhar Death Chute, or as I like to call it the Lord Farquad death chute in honor of Madi Hays, my Shrek loving friend. Definitely loose and crappy. Made it to the semi saddle in great time, but then due to scouting trips from last year tried to go left through the notch instead of straight up the chimney. Wasted about an hour trying to make that work before going the correct way up the chimney. Then coming off the summit again tried to make the entrance to that northwest chute connect to the death chute. All because I did not want to go 100 feet back down the ridge to the chimney. Stupid, Matthew, stupid! finally connected the chute with some less than safe moves, definitely the sketchiest part of the route! Glad I never have to go back there.

On to Split. Split had given me problems in years past but I popped two caffeine pills and flew up it. Summitted before midnight and was feeling great about the long JMT stretch upcoming. I was ready for some mindless trail miles. Knocked out Pinchot, Glen, And Forester pass the next day on the JMT. I ran this section hard, pushing the downhills and popping over Forester around 5:30 feeling great about where I was, how I had packed, and how much of the JMT I ran.

Night two was Tyndall and Williamson. Lack of sleep really caught up with me here. Tyndall went pretty well but getting through the Williamson bowl at night sucked. I grabbed maybe 45 minutes of sleep here, summitting Williamson at 5:30ish in the morning.

Over the Talus Ocean to Russell, my nemesis! Finally got here in the daylight which paid off tremendously. I had a fun but slow climb up the north ridge to the summit. The maze of cairns on the north ridge route is absurd, but the climbing is really fun 3rd class. On over to Whitney, where I got into some 4th/fifth class slabby terrain instead of the 3rd class rib I was trying to find. This cost me some time but still summitted around 6. Was very excited about my time through here (a little over 60 hours) with two peaks to go.

Muir was a straightforward 30 minute detour from the Whitney trail. Could see evidence of the fire that had made its way up Lone Pine Creek that week, which was disheartening but there was no smoke.

And then things fell apart! With one mountain to go of course. This section I had only done in daylight going the other direction. Crabtree pass, a short, off-trail pass, was a nightmare, made worse by a knee and ankle that had given out by this point, and the fact that no moonlight was making it into the bowl. After this, a series of never ending ledges proved next to impossible to navigate as I made my way past the huge lakes in this section (sky blue, rock creek, etc.) Feeling disheartened by the incredibly slow movement on relatively easy terrain and staring up the maze of chutes on Langley's west face, I snagged a couple hours of sleep and waited for the sun. The next morning I slowly and painfully made my way up Langley, spent an hour on the summit basking in the pain and celebrating in the knowledge that yes, really, I never had to go up Farquad or in between Williamson and Russell again. 4 hour slog down to Cottonwood Lakes and that was that! times were 79 hours to Langley and 83 hours trailhead to trailhead

Norman's unsupported FKT! Finally! I love this line so much because of how it echoes the epicness of Nolan's 14. So grueling yet so simple in concept, climb a bunch of big mountains in the same range.

A note on speed: It feels so weird submitting an FKT while knowing just how slow I am and how much faster the route could be done. I am very slow, I just really like being in the mountains and using self-sufficiency. Seemingly everything in the Sierra worth going fast on has been gone fast on by Sean O'Rourke. He is a legend in the range and just unbelievably fast. If anyone can do it under 60 hours its definitely Sean. He is one of my mountain heroes and his Sierra 14er book helped on this attempt so thank you Sean!

Admin note concerning verification of this effort:  Matt didn't do a great job of verification.  To save batteries (?) he only turned on his COROS watch (see Strava) and SPOT tracker (see the GPX track) for short periods of time, typically on the summits.  But, in some cases one or the other of these devices didn't get a good location fix during the limited time they were activated.  Matt did get a fix from one or the other device on every summit EXCEPT Middle Palisade.  Fortunately, he took 2 photos on that summit (attached).  The metadata from these (iPhone) photos indicate the correct time that Matt would have been on MP.  Plus, these have been confirmed by an independent person with intimate knowledge of the peaks as having been taken at least close to the summit of MP.  Finally, the COROS watch did report an altitude above 14,000' at the time in question, and since MP is just a bit over 14k that adds more evidence that he reached the true summit.  Therefore, we are satisfied that Matt's trip is adequately verified.  But please let's not make this the norm!

Congratulations Matt...it has been such an inspiration to watch you chase this over the last few years.  So happy it came together for you!