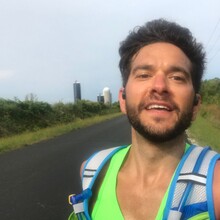 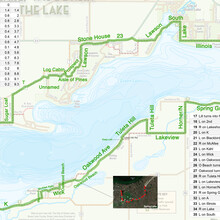 This Sunday I ran the fastest (and first) unsupported FKT on the Green Lake Circumnavigation course.  I actually ran a similar route around the lake during the summer of 2019 (before the FKT route was a thing). The course was very similar though it was optimized to minimize turns reducing the likelihood of getting lost.

For the FKT run this weekend, I carried a printed and laminated map with turn by turn instructions and mileage, inspired by Will Brewster's FKT and write-up.  The map was absolutely critical and almost perfect in taking the thought and confusion away from the task of running a long route with lots of turns (I've since updated the map and uploaded it here).  The most challenging orienteering aspects of the course are through the North/Central and South/Central portions of the route. The northern portion of the route runs through the Golf Courses of Lawsonia, which include a few roads that turn into other roads, and a turn onto an unnamed road.  The South/Central portion of the course offers the most challenging areas to navigate, particularly the stretch along Oakwood Beach Road, where it turns into Oakwood Ave.  Another challenge is just before Oakwood Ave turns into Tuleta Hill road, there is a small road which is also labeled Tuleta Hill road. Knowing the next instruction is "Oakwood turns into Tuleta" I was tempted to make the right turn onto Tuleta when the correct choice is sto keep left onto Tuleta Hill road.  This portion of the course is also the course's most hilly, adding to the struggle of keeping brain function while operating at a high workrate.

I started the course in downtown Green Lake at the intersection of South St. and Lawson St., then headed counter-clockwise around the lake.  I ran the loop as part of this year's Virtual Boston Marathon, so following the loop, I did an extra 3.2 or so miles to complete the 26.2 necesary.

With the official FKT route now under my belt, I'm hoping to take a shot at Will Brewster's 2:44:37 later this fall.