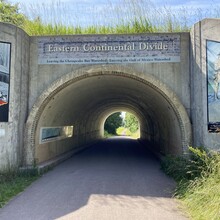 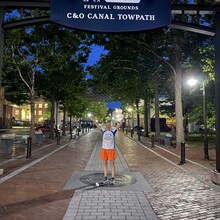 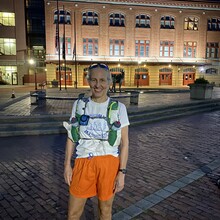 Began ~5:26am, 11 minutes later than intended. Choosing late June for attempt was meant to allow starting at day break & finishing at twilight, as well as ideal weather. Temp 46 degrees & calm -- perfect. Wore Ultimate Direction Jurek vest w/two 600ml bottles; 4800 calories on board in form of various solid foods, gels & Gatorade powder for three 600ml refills. Hand carried a 16oz. disposable water bottle made of lightweight plastic that easily crushed down to stick in the waistband of my shorts, once emptied. Never throwing this bottle away was my smartest spontaneous decision of the day.

Felt good right away and was banking time early w/ease, knowing pace would slow to a realistic level, once eating & walking started. Due to cool & lovely morning, the option to stop at the Outflow Campground in Confluence (mile 10.6) for water was not necessary. This was a time saving bonus, since it would have required a short off-route detour. After crossing the footbridge into town, I got "lost" for a minute, as there was no obvious sign pointing toward the northeast heading trail. NOTE: the correct direction is straight forward on Old Robert Brown Rd. for .1 mi. until the trail is seen again on the other side of Route 281.

After Confluence, views of the Youghiogheny River were traded for crossings and sightings of the Casselman River, which was a constant delight. The gentle grade of the rail trail changed regularly for the next 20 miles. This added further interest to the course, as well as changing up my rhythm & effort in a refreshing way. At the Pinkerton Tunnel (~20mi.), I took a minute to clear a chip from my shoe & lube my foot. Surprisingly, this turned out to be the only time foot care was needed. Credit to the incredibly smooth & packed nature of the path for sparing me from any significant blisters. This meant I never lost time to change socks.

Mile 28.0 at Rockwood was my first lengthy stop. A public fountain is right on the trail to refill bottles, as is the case for the remainder "aid" stations mentioned below. Rest was brief, as I had a goal time in mind & walked out to eat lunch while moving. The course continued in the same pleasant manner, mostly shaded as the sun climbed in an intensely blue & clear sky. At mile 35.5, I noticed that the trailhead at Garrett, PA now included a new public fountain, which was unexpected. My vest bottles were still full, but, topping off my handheld gave comfort as the morning humidity had given way to very dry air & increasing thirst.

The next planned stop was at mile 40.05 in the large town of Meyersdale. I hit that major checkpoint exactly on schedule at ~1:41pm (8h 15m) and made a pre-agreed upon phone call to my spouse, who was on call for emergency bail out. Food was still going down easily & my legs were fine, so, we agreed I would check in one more time at the Continental Divide & then press on, assuming spirits were good. NOTE: there is a popular Visitors Center at the trail in Meyersdale where food or drink could be purchased, if running self-supported vs. unsupported.

Banana and sandwich in hand, I next began the 8.5 mile trek up to the Eastern Continental Divide, under an intense sun. Luck was on my side in the form of a strong & straight tailwind. The only problem was this was also causing me to feel a bit "dry roasted". Normally, with a temp in the upper 60's, sweat would cool my head. But in the exposed conditions, my hat was bone dry & unexpectedly uncomfortable. I risked sunburn by taking it off to feel a breeze. According to the angle of the sun, I kept donning & doffing the hat until the sun set, tucking it in the back of my shorts when it was more cooling to go bareheaded. It was a good call, especially since I knew that I could stop to apply more sunscreen if needed. Fortunately, I was never in danger of truly overheating & never needed to spend any water to cool my skin. Be warned, however, that could easily happen in even slightly warmer weather.

Even as I contended w/the concerns above, the now open views of the oncoming ridge and the surrounding fields were beautiful. Using walk breaks liberally, as planned, conserved energy & helped keep the core body temp in check. Patches of shade vs. sun helped determine when to run vs. walk & gave me visual short term targets on which to aim. Then suddenly, at mile 48.5, I found myself at the Divide. Somehow in planning, I had miscalculated where the crest of the route would come. Thrilled to hit this point exactly when I told my crew I would, I snapped & texted a photo, rather than taking time to talk. The clock was ticking and my timeline was now off by 1.5 mi., due to the mapping mistake.

Now the trip would lose elevation dramatically, dropping from 2393' to 610'. Yet, with 23.5 miles still in front of me, there was no guarantee that Cumberland would be my endpoint. Downhill or not, once I passed 50.2, this would be farther than I had ever run before, unknown territory for my body & mind. Nonetheless, my legs felt great cruising thru the huge Big Savage tunnel. The mile 50 post was an exciting landmark to find deep inside the structure & I was immediately greeted by wonderful vistas once I popped out on the other side. The high of breaking a new distance threshold lasted for a bit, then the day got grippy for the first time, w/queasiness taking hold. To calm down the tummy, more walks than planned were necessary.

Still, forward progress was made without any complaints from the muscles & I churned on to Frostburg at mile 56.6. This last aid stop was executed as quickly as possible, due to my goal time hanging in the balance. Once the bottles were filled, my shoulders began to ache from the fresh load and so many hours in the vest. It weighed 9 lbs. at the start, & though lighter now, the tugging on my neck and bones was the most uncomfortable sensation I had to contend with over the final 15 mile stretch.

Despite this, as the granite posts appeared & counted down the miles, my mood lifted & the stomach came around. Peanut M&M's, caffeinated gel and Gatorade were keeping my energy up & the downgrades allowed a decent trotting pace. Of the 4800 calories carried, I consumed ~3700, just above the planned minimum & leaving only the lighter items uneaten, so that I carried as little weight as possible in the end.

Calculating the per mile pace I needed to maintain for the remainder, I became more confident it was possible to still sneak in under the target. Every marker in the last 10 miles made me a bit more giddy, as long as I focused ONLY on the distance  vs. how much time I had left to stay on my feet. The previously agreed upon emergency bailout points at 62.6 & 66.9 were coming and going, without a need to use them. I glanced at my Timex, seeing splits that were improving, rather than slowing. Just as anticipated, adrenaline was kicking in -- the magic final ingredient in an incredible experience.

By 5 miles to go, I had built a little time cushion & could finally relax mentally. The lights of Cumberland, including the big red letters of the local radio station blinking on the mountainside, made me smile. People walking their dogs appeared in the waning light & said hello as I jogged by, having no idea what arriving in their neighborhood meant to me. A few final turns and I was scooting down the brick sidewalk toward the historic train station & looking for my loyal crew of one, aka patient spouse. Twilight had set in, exactly to plan, as I reached GAP mile 0, with a few minutes to spare.

My day was just about as perfect as it gets, exhilarating in every way. I hope others will similarly experience this route for all the reasons that made me attempt it -- its beauty, interesting sites & variety. NOTE: the last mile could be confusing for someone who is exhausted. I knew it from riding the GAP in 2021, or otherwise, might have needed to stop and check trail markers. Study the satellite view of the finish area map, if you are going to give this route a try.

Notes on tcx file elapsed time vs. submitted time taken from Timex wrist chronograph: I accidentally started the MapMyRun tracking when I left the car vs. starting it just before putting the phone in my pack to run; this added 7:06 in time (by my watch, first mile split was 11:24 vs. 18:31 on MayMyRun split); at the end of the run, it took several minutes to retrieve the phone from my pack and turn off tracker; the squiggles in the tracking map show these stop & start points.

Notes on tcx file vs. submitted distance: .25 mi. was added by mistake at start, walking from car to MM 72 (see above); at Confluence, .19 miles were added for a slightly off route potty and 2 short way-finding spurs; there were at least 3 occasions when I backtracked 10-20 meters to pick up dropped items; going slightly off trail at Garrett for water added ~.05 mi.; at the 3 self serve aid stops, I moved back and forth from water fountains to sit at benches, use potty etc., adding some distance; other distance added by tracker must be for movement that was occurring during numerous potty breaks (8) and stops to adjust shoes, apply lube etc. (5). Post run, I went back to MapMyRun and re-created my route exactly, including the tiny additions in Confluence, but no other movements backward, sideways, etc.; this resulted in a 72.19 mile run. Here is the link to that route: https://www.mapmyrun.com/routes/view/5065289368