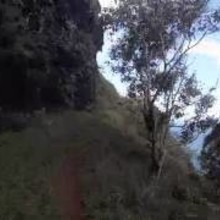 Max ran the full trail (TH to Kalalau Beach waterfall and back) in April, 2012, less than a week after competing in the U.S. Olympic Trials for steeplechase.
He wasn't in a huge rush considering that he stopped several times to provide narration for the video (with the clock running) and took a lengthy break (with the clock running) at the beach.
Max reached Kalalau Beach in 2:13, then spent 22 minutes there (taking a dip in the ocean and rinsing off in the waterfall at the far end of the beach), before beginning his return at 2:35.
The return took him 2:24 and he reached the trailhead finish in 4:59:38, a time that is supported by the Park Ranger's report (previous post) of a fastest known time of "5 hours flat."
That's an impressive time; it would be interesting to see what an elite runner could do there if they were really "going for it."