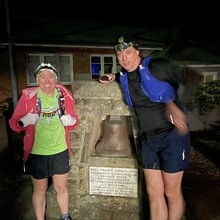 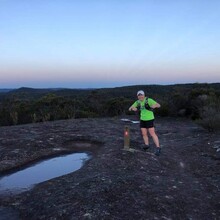 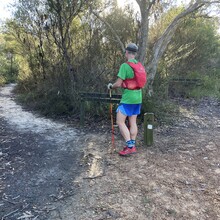 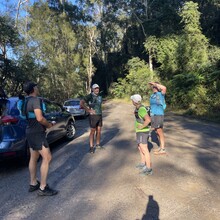 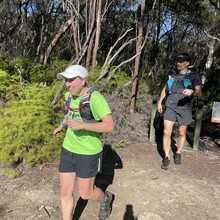 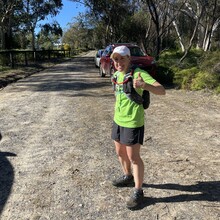 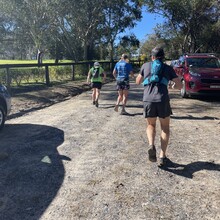 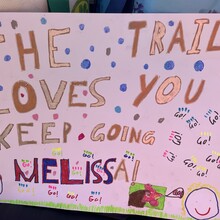 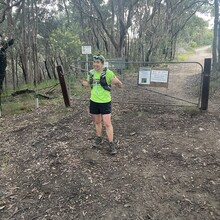 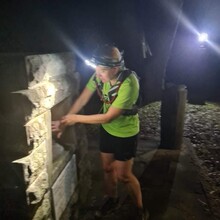 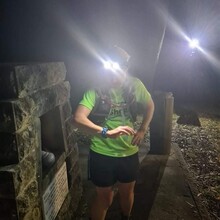 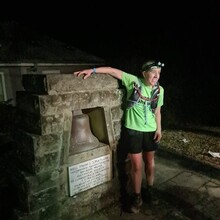 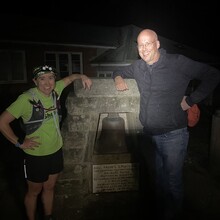 I was registered to do Lakes 100. A 100km trail race up near Hawks Nest, so had been training sand for a couple of months to handle its long sand sections. Unfortunately, Greater Sydney got thrown into lockdown the week before the race and it had to be postponed. So when you've been training for a flat sandy run, clearly the only alternative is to instead go for a technical hilly FKT!

I started in the cold at 4:30 am with Tim, who wasn't going for the FKT, but was aiming to complete the 100km (he made it 76km, the furthest he's ever run). Fortunately, the current lockdown rules don't limit the amount of exercise you can do AND this entire FKT route is within the lockdown zone. So it was on!! Speedy early morning section through the bush and streets, running past Bernhard at Pearl Beach (I was ahead of schedule), he then caught up to me at Warrah Trig. And the sun came up as we were hitting the sandy GNW trails on the way to the tip (sounds worst than it is... it's actually a really nice section).

Some Yellow Tail Black Cockatoos were enjoying the morning too as we traversed the rock platforms and crossed Mt Wondabyne (There's a new toilet at Wondabyne campground! Kind of exciting for trail runners). I messed up the trail we were meeting Gordy on who had caught the train to Wondanyne, but we eventually found him around Scopas and Bernhard pealed off for Girrakool, Gordy and I continued north on the GNW.

We ran into Hoody & Foggy on Karool Rd as they were doing GNW training for the upcoming race in September. Then started hitting more bushwalkers also out enjoying the warm winters day. The track was pretty overgrown above the dam on the way up to Somersby. Liz joined us from Silvesters to partway down Dog Trap before turning off to head home. Dog Trap Rd was honestly the worst part of the whole run. I thought the downhill would be nice, but after the lovely bush trails, the hard road surface was killing the feet. Plus the road is just dangerous, no shoulder and blind corners... We ran it carefully. But still, it was unpleasant.

Across the bridge and into Strickland. So much for lockdown, every man and his dog was in the forest that day. I've never seen it so busy. The downhill trails did however make a nice change from the road, so I picked up speed a bit, through Strickland and into the Eco Village, which was wonderful to see in daylight (I've only been through there in the dark before). They even have their own cafe!! Gordy parted ways with me near Narara station and I crossed through Wyoming and started the hike up to Mt Elliot. Across the mountain, down then back up Kincumba Mountain. There is one change to the course here. Originally it passed through Bluebell Park and used that track to access Kincumba Mountain. Unfortunately, that track is now closed and very clearly signposted, fenced and a house getting built on it. So I instead ran down the road a bit further and came up the stairs at the end of Sandringham Close (adds maybe a couple of hundred metres). Then it was up Kincumba Mountain (with the mountain bikers enjoying their afternoon), across the top and the steep track down.

Breezed through Kincumber, and the dirt track onto Empire Bay Drive, another unpleasant road section. Mostly cause there's no shoulder on it. I was very very glad when I could turn off it and also glad I didn't have to do it in the dark. Then onto the final section through Bouddi. This is such a slow section. I was pretty tired and I couldn't run down the stairs, let alone up them. So now with the sun setting. It was hiking what felt like never-ending stairs up and down. And I'm sure extra climbs just appear when you're tired. I did however get to see the new Little's track, which was quite nice. The stairs finally led me down to Maitland Bay where I put all that sand training to good use, for maybe a kilometre of sand running, before the final climb. I've done this climb after a swim at the bay, it's not too bad, except when you've run over a hundred K's. Then it feels like Furber Stairs. So it was hiking, in the dark, up the stairs. Before a final run along the path back to the bell and the finish!!

TRACK VARIATIONS: The original course accesses Kincumba Mountain via Bluebell Park. Unfortunately, the track that goes from the park to the mountain tracks is now permanently closed (Very clearly signposted, fenced and a house getting built on it.) So I instead ran down the road a bit further and came up the stairs at the end of Sandringham Close (adds maybe a couple of hundred metres). I'd recommend this route to any future FKT attempts.