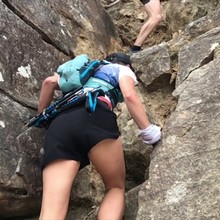 Starting at the beginning of the Six Foot Track at Jenolan Caves House at 1am on 26 Oct 2019, I followed the Six Foot Track and ascended Devil's Hole into Katoomba. After turning into Cliff Drive and Glenraphael Drive, I descended the Golden Stairs and went over Mount Solitary (where I signed the log book at the top). After coming up Kedumba to the old Queen Victoria Hospital I turned left on Tablelands Rd, Wentworth Falls before turning right onto a short trail that connected to the Ingar trail. Following the Ingar trail took me across Bedford Creek and to Bedford Rd, Woodford. Running right on Sutton St and left on Taylor Road took me to the Oaks trail head. From here I continued along the Oaks to the entrance of the Glenbrook National Park. From here I ran on a couple of streets to get to Darks Common, which took me towards Explorers Road and Lapstone Station, which I crossed over. From Lapstone Station, another short trail took me to Leonay Parade. From here, I followed River Rd, along the Nepean River to Regatta Park, Emu Plains.
The planned map distance was 118km, but my watch showed 122.5km when I finished.
A range of people joined along the way for running the different legs & as crew support at 5 checkpoints along the way.
As the establishment of this FKT route was my birthday celebration, at Regatta Park I celebrated with friends and family with pizza & cake.