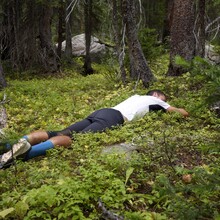 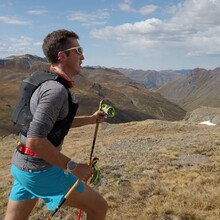 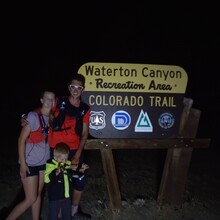 I started on September 14 in Durango.  Last week there was a massive snowstorm throughout Colorado which made me very anxious going into this.  I was worried that there would be too much snow in the San Juans and that my FKT attempt would derail.  When I got to my first crew spot, which was just before a very high point on the course, a thru-hiker told me it was a sloppy mess up top.  I asked my crew to get me my Alpine Salomon shoes so I wouldn't have to deal with wet feet.  To my shock, my crew reported that my big bag of 12 shoes was missing.  We later found out that someone stole all of my shoes.  Frustrated, I left without eating enough calories and asked my crew to go to Durango Running Co to purchase me a bunch of shoes.  The thru-hiker was right.  For the next 10 miles there was snow, mud and water all over the trail.  My feet were soaked.  But I tried to remain in high spirits and took a lot of photos of the snow covered peaks and ridges.  Next crew spot my crew chief, Ben Light, showed me 6 shoes he was able to purchase at the Durango Running Co.  It worked, but running in new shoes for the next week didn't seem ideal.  It was my only option though.

The San Juans licked me.  I was extremely tired by the end of the first night, which ended up helping me get a good 1.5 hour nap.  Each night I tried to sleep between 1 - 2 hours (which usually didn't end up happening).  Most of my journey consisted of quick 1-5 minute naps on the side of the trail.  I had pacers for most of my journey, which really helped as we got closer to the finish.  By night 4 I was struggling to stay awake most of the time and needed conversation to keep me somewhat coherent.  My crew met me every 20-30 miles and resupplied me with food.  My brother, a kitchen manager at a Brazilian Steakhouse, provided me and my crew steak for our journey.  I had a large variety of meat to choose between at each stop which really helped lift my spirits whenever I was exhausted.

The weather ended up being perfect, aside from smoke due to wildfires.  Thankfully the snow was mostly melted by the time I hit the Leadville area and that ended up not being much of a factor like I worried.

An interesting note that I wasn't aware of.  Waterton Canyon (the final 6 miles) is closed from Dusk to Dawn every day.  Security stopped us twice telling us we were trespassing.  I was extremely worried they were going to make me get in a car and ride out with them.  Thankfully they were polite and said to get out fast.  For future FKT attempts, the runner should take note of this.