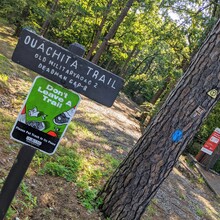 Left OKC at 0500 in hopes to get on the trail just after 0800. A few pit stops along the way and we're in the parking lot. I had a friend running a separate shorter out-n-back. We're both training for Leadville events. We initially started out together prior to 0830. A half mile in I looked at my watch and found out I had yet to start the run... Fail!

After returning back to the trailhead it was time to start again. We're off just after 0830. I had my trusty Salomon vest and carried two 500 ml soft flasks with Tailwind Nutrition, 2 ZipLock bags of tailwind nutrition, and two more 500ml water bottles in the back to mix the Tailwind. There were 2 Liters of fluids total. Food wise included Clif Bloks, 2 Gus, Golden Graham Bar, Cinnamon Belvita Crackers, and a pack of Cashews. Everything I ingested was carried in the vest... unless you count spider webs!

I ran the loop CCW and started out way too fast. I remembered the climb out being steeper, but I felt good enough to run uphill for most of it. Running uphill early, coupled with other challenges made the latter half a rough time. I ate well along the way and had times were running felt easy. The trail is technical with a lot of rocky terrain, so mentally the run is taxing. About halfway through the run the heat had made its way under the canopy of trees. I drank frequently to stay ahead of the game, but would run out of fluids with 10km still to go... Could have used at least one, if not two more bottles of water. The final climb up to Oklahoma Highway 1 was a challenge. There was only a little over 2 miles to go once past the highway and mostly downhill, literally.

This is a quality loop and could be run much faster. Give it a go in the winter months and the weather and trail will be easier to maneuver through. I've got more in the tank for a back and forth on this route!!!! :)