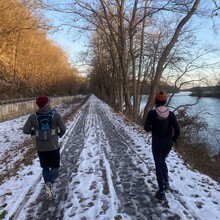 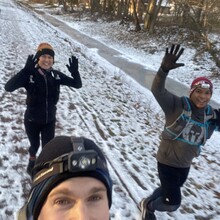 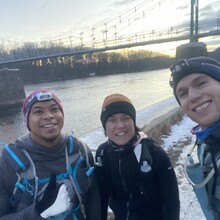 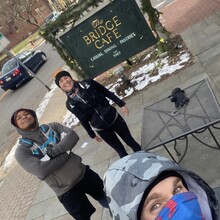 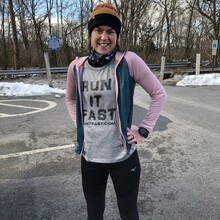 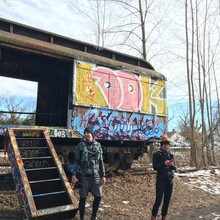 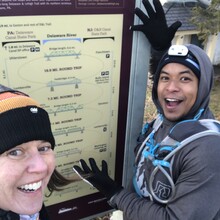 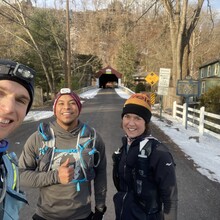 Three of us (me, Josh Milich, and Joel Cervantes) started in New Hope, PA at exactly 6:00 AM on Monday January 10, 2022. The plan was for all three of us to run the full distance and finish together as a mixed-gender unsupported team. We had shuttled my car across the bridge to a spot along the towpath in Lambertville, NJ before we set out, and had all of our snacks, drinks, and gear in there so that we could access it at the halfway point. It was COLD and we there was snow and a lot of hard, crunchy ice on the towpath from freezing rain the day before. It made it difficult to run, and deinfitelty slowed us down a bit.  From New Hope, we headed north toward Frenchtown, NJ. It was dark and quiet on the towpath, and we had a good view of the sun rising over the river. There were 2 spots along the towpath that had been damaged in Hurricane Ida and made for some tricky navigating to cross a creek that fed into the river. In one spot, we ended up cutting through someone's yard as fast as we could to get back to the towpath after a little detour due to the aqueduct being out. We reached Frenchtown and crossed the bridge to New Jersey. We made a pit stop at Bridge Street Cafe so that I could use the restroom and buy an amazing oversized chocolate cookie (which then froze rock hard in my pack, but tasted pretty amazing after about 30-40 miles!). The NJ side of the towpath was more shaded, and more snow-covered and icy. We did our best to keep up the pace in the conditions, but the surface was jarring and rough. This didn't bode well for Josh who had been working through a back issue for several months. Unfortunately, by the time we reached Lambertville, NJ the pain and discomfort from the slippy, uneven, icy path had become unbearable and Josh had decided to leave us at the halfway point. We were all really disappointed and had wished for a different outcome, but it wasn't worth doing more long-term damage and further injury. We refilled our packs, quickly changed into some dry base layers, and Joel and and I continued on. There were sections of the path on the way down to Trenton that were more clear and runnable, but others that were just as icy. We employed a jog/walk combo for a bit in several of those miles, but got to Trenton, found our way to the bridge, and crossed back to the PA side of the towpath. The temperature had been steadily dropping throughout the afternoon, and for some reason this section was the COLDEST I remember. It was painful to remove a glove even for a minute. We jog/walked a bit more, and then Joel insisted that I go ahead and continue running. He hadn't been sure he would continue after Trenton, and although he decided to stick it out and see it through (grit!!), he knew that he would be walking more than running and didn't want to hold me back. We talked it through and came up with a plan for how to meet up after (my car was still parked on the NJ side) when we each reached New Hope. It was kind of a tough decision because it wasn't what we had planned. But after a stretch of jogging, when he slowed to a walk I decided to just keep going. I really wanted to finish and was determined to run as much as I could to get there. It was COLD and got dark by about 5 PM. The towpath was eerily quiet, no lights, no people, not much of anything but a dark path along the canal. I pushed forward, did my best to stay hydrated and keep up on nutrition (eating enough had been a goal for the day for me), and just kept putting one foot in front of the other. Some of my fastest splits were in those last 10 miles. I just had to get there and stayed focused on the task at hand. I was SO glad to finally be able to see New Hope ahead of me, and to get into town and have the finish in sight. I came in just under 13 hours, stopped my Garmin and stumbled over to a cafe for a hot cup of coffee which I desperately needed. I had about a mile or so walk back across to NJ to get my car, get myself together (slightly), drove back to PA, and met Joel as he arrived in New Hope. It was not the finish we had all planned, but it was a stellar day and such an amazing adventure with friends. I am soooo grateful for the opportunity and glad to have done it. However, the three of us will go back and do this again - we're confident we can finish this much faster, on a milder day with no snow or ice on the ground. So stay tuned, we'll be back as a mixed-gender team and plan to beat my time (and will do it unsupported)!!