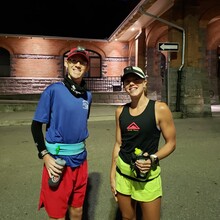 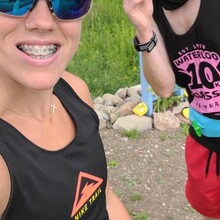 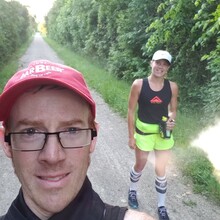 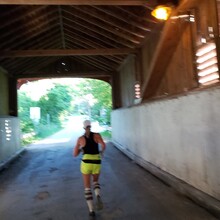 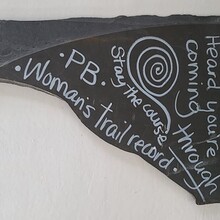 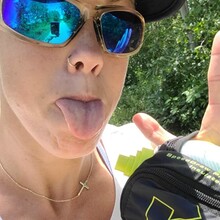 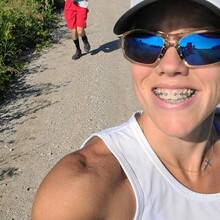 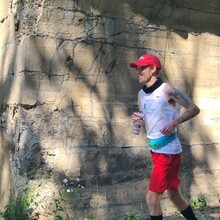 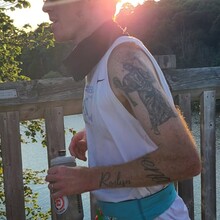 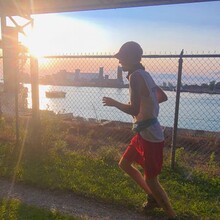 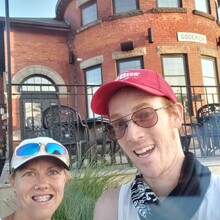 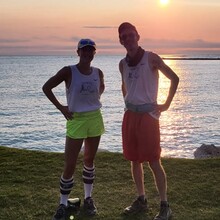 Ever since I ran the Kissing Bridge Trail end-to-end a couple years ago I had been eyeing the much larger G2G Rail Trail, which incorporates the KBT.  I enlisted Amanda to help because I knew she was capable (more so than I was, as it turned out) and because we were due for another running adventure.  Our respective spouses served as expert support, meeting us every few miles to supply us with everything we needed.

Amanda and I took off from Central Station in Guelph at approximately 5 a.m. with the intent of finishing at Beach Street Station Restaurant in Goderich.  We were confident we could complete the entire G2G Rail Trail in under fifteen hours and forty minutes.  With headlamps on we negotiated the paths and roads (and cemeteries) of Guelph until we reached the Kissing Bridge Trail.  The trail itself is very straight, flat, and runnable.  We maintained an efficiently quick but comfortable pace, completing the first half-marathon length in 1:47 and the first full-marathon length in 3:44.

After 28 miles the KBT becomes the recently restored Perth Harvest Pathway.  Although the trial was very well maintained I was starting to tire.  I wasn't ready to walk, but my pace was slowing, and stops with the crew were more frequent.  Still, we were making excellent time and anticipating an easy FKT.

Gradually but steadily I was losing steam.  My physical body was holding up, but I was running out of gas and had no appetite.  I wanted to rest.  I wanted to stop.  Amanda, for her part, was looking and feeling solid and enthusiastically prodded me to keep running.

The most difficult portion was the 22-mile stretch of very straight, very exposed trail west of Monkton where the PHP becomes the Lake Huron Route.  Although we had enjoyed near-perfect weather, the afternoon sun was bearing down and there never seemed to be enough shade.  I began taking walk breaks.  Sometimes my hamstring would randomly seize up and we'd have to stop.  My urine was getting dark.  I still had no appetite.  After fifty miles of running my body was falling apart.  As we entered Blyth the FKT seemed like less of a sure thing.

We knew we didn't have far to go, though.  Amanda kept a mental check of our pace and assured me the FKT was still feasible.  I was more interested in making basic forward progress than in maintaining a good pace, but I was still determined to finish, and if we were going to cut it close I knew I would find something within myself to ensure we reach our ultimate goal.

The Maitland River crossing outside of Auburn perked me up.  After 75 miles of crushed gravel and packed dirt it was something different.  The current was stronger than expected, but I was having fun again (until I gave myself a wicked charley horse on the opposite bank trying to drain the water out of my shoe).  The river is less than ten miles from Goderich, we were still on schedule to finish in good time, and with that knowledge I was motivated to continue.

For the next two hours we ticked down the miles (I ticked down miles, Amanda ticked down kilometers).  We made one last quick stop about three miles from the finish and pressed on.  Once we were confidant the FKT was ours I relaxed my running/jogging/trotting pace a little but walked with less frequency because I still wanted to finish as soon as I physically could.

Once in Goderich we crossed the Menesetung Bridge (Amanda's first time!), passed the grain elevators that overlook the harbor, and arrived at Beach Street with nearly half-an-hour to spare.  What an adventure, and what a physical and emotional roller coaster.

Without everyone's support I would not have finished, and I would probably still be curled up on the trail somewhere between Monkton and Blyth.  Amanda looked fresh at the end and could have probably ran all the way back to Guelph.  Instead of ditching me at my lowest and slowest she stuck by and kept encouraging me to move.  She had more confidence in me than I did.  And our spouse-crew was amazing.  They kept us fed, hydrated, motivated, and alive.  I am blessed and thankful to have such supportive people in my life.