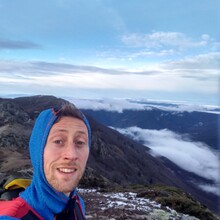 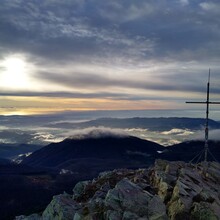 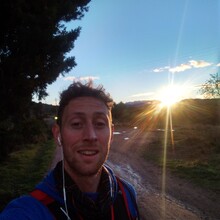 During the weekend of the 11th March I did a supported run of the GR5 from Sitges to Canet de Mar. The route called Els Miradors passes through 5 Natural parks including Garraf, Montserrat, Sant Llorenç del Munt i Serra de l'Obac, Montseny y Montnegre-Corredor and covers around 230 km and 8000m of ascent. I completed the route non stop in 47 hours 4 minutes.

The old record was set by Oriol Antoli in 51 hours.

I started at 8pm on Friday from Sitges after work and faced 18 hours of non stop rain and heavy downpours through the night and into Saturday. Fortunately, I had a support team who were also filming the run for a new documentary called "I could never go vegan" due out at the end of the year.

I had support runners for approximately 85 km and the rest was done alone. Fatigue and exhaustion started to take its toll going into the second night approaching the hardest section of the route with most ascent. During the Traversia de Montseny, the cloud was low and hallucinations and falling asleep when running became problematic. Luckily some food helped to stop the worst of it and I made the summit of Matagalls by 5am. This section of the route is 55 km long and has 2300m of ascent and forms part of the GR5.2 variation that passes the summits of Matagalls, Les Agudes and Turo de l'Home before a long descent to Sant Celoni.

For the final 30km from Sant Celoni, I had support runners which helped so much with the motivation to keep running through the tiredness of 45 hours of running and badly blistered feet. I finished just after sunset on Sunday evening to celebrate with beers, friends and vegan kebabs! Luckily I wasn't working on Monday !