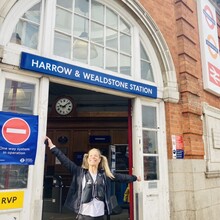 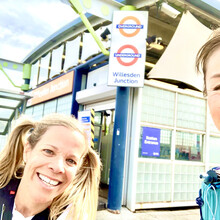 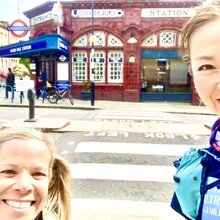 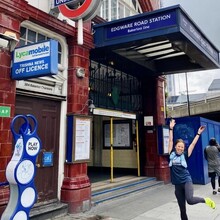 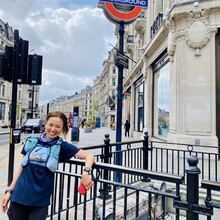 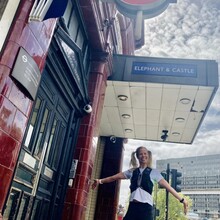 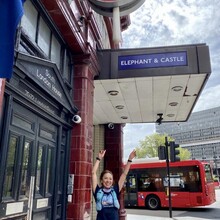 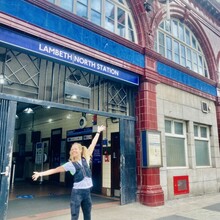 Harrow and Wealdstone is the north end of Bakerloo line where we started, is only 12 minutes West Midlands Trains ride from Euston station.

We arrived at 8am past, the first picture of fresh looking Kelly at the station shows 9am past. - as a proof picture of us, Mrs. Detectives, some unicorns in the air!

We had a wonderful time flying up and down the streets of Wealdstone and Kenton.Each neighborhood had its own colorful vibe.

We hit a hiccup at North Wembley when a passage was locked up. (Video camera with metal gate!)  We had to take 2km + detour just to touch the North Wembley Underground Station, but we did not mind(ahem so Kelly says)

It was lovely to see the Wembley Arch from a distance reminding us of exciting days with live matches and concerts that will soon be within our reach.
Willesden Junction presented us with the challenge of figuring out how to rejoin the path.
It was fun climbing the stairs and crossing the overpass and finding ourselves back on route!  When we hit Queens Park, It felt like we were entering central London.We could see the BT Tower at some point signaling we were making progress.

It was fun going through the underpass and then crossing over the canal at Paddington. Always a fun canalboat scene there. It was quiet this Sunday morning though.

We enjoyed the peace.

We ticked off Edgeware Road, Marylebone and Baker Street stations and admired their tiled exteriors. Reminders of the past.

Oxford Circus was beginning to pick up with Sunday shoppers, but we didn’t have time to window shop, we had an FKT to tackle!!

We passed the welcoming Jumbotron at Piccadilly Circus and then the larger than life Lions at Trafalgar Square before crossing the bridge at Embankment.

Waterloo Station awaited us with its many tracks and entrances and we knew we just had to pass Lambeth North and end our journey at Elephant and Castle.

Like all of our FKTs, we were happy we finished, but sad it was over!