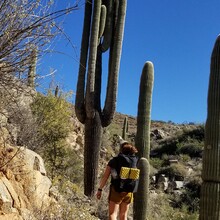 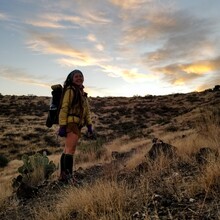 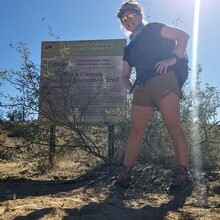 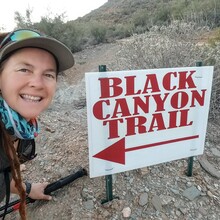 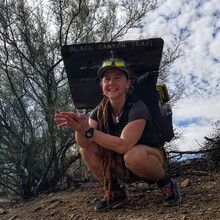 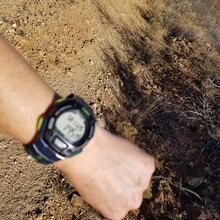 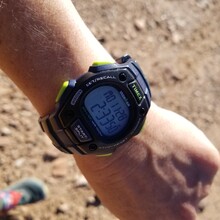 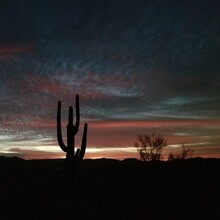 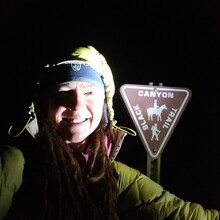 This was a super fun little project close to home. I've scouted several sections of this trail in teh past and wanted to see the whole thing in one go. This is a perfect time of year to hike the BCT, yet I could not rely on any water sources so I cached water in seven locations which worked out great as I never needed to carry more than 2 L at once. Longest stretch between water was 16.5 miles. Pockets of this trail travel through stunning Saguaro forests along with other beautiful vegetation. There are several natural water courses that would likely have water in the Spring after decent rains. I did see moving water in three locations. There are several wildlife tanks along the way however the BCNRT Coalition is not in favor of sharing their location and wishes for travelers not to utilize them. I will note that the Northern end of the trail is quite unclear. I downloaded and followed the GPX track from this website, and at the waymark for the Northern Forest Service Boundary there currently is no signage, no boundary markers, it is just the middle of a dirt road. That said, I would argue for a Northern "terminus" to be at Russian Well, just about .25 mile South of the unmarked Forest Boundary. There is also a trail segment up there where I followed the signed trail whereas the GPX track I downloaded went a different way along a dirt road, so there is a little discrepancy there. FYI for future folks on this trail. As for the Northern Terminus, I reached out to the BCNRT Coalition folks and they say the trail is being extended toward Hwy 69 at Orme Road. I drove up there ahead of time and could not locate any trail markers etc thus chose to follow the exact GPS mark from the track I downloaded for the official start of the trail. I think in the future the trail may need to be officially extended on t his site, once it is officially marked, as it is on the BCNRT map now. I also believe they plan to continue extending the trail even  further to the North at some point. That said, the GPX track I downloaded indicated the trail is 72.42 miles in length and the BCNRT states it is 80 miles, whereas my Strava tracks indicate 81 miles. Additionally the downloaded GPX track indicated a total elevation gain as +7,523 and loss as -10,303 where as my Strava recorded a gain of +6,090 and does not record loss, unfortunately. At the Southern terminus, according to the BCNRT map, the trail ends at Hwy 74, whereas the GPX track from this website extends it for .8 mile along Hwy 74 ending at a dirt road pull out just past mile marker 89. I would argue that any future FKT attempts could legally finish at the HWY 74 official end of the trail and this is most likely why my Strava came out to 81 miles and not 80. Not sure why the person who created that track ended it where it did, I think it's not the official end of the trail but I chose to finish there in keeping with the precedence set. I had a really fun time on the trail and enjoyed how remarkably well maintained and well marked the entire trail is, thanks to the BCNRT Coalition. They on on top of it! It should be noted that along the trail there are several shooting ranges, so hearing gunshots is a regular occurance, but mostly in closer proximity to dirt road crossings where there is vehicular access. Usually the gunshots could be heard for around 30 minutes of moving time through those sections. It is a little nerve wracking however I don't believe it poses a significant threat to trail users. Anyway, I know my time is not super stout, but I got a lot out of the experience. My personal goal was to bring more awareness to the trail, do something close to home and put a solo, self supported women's time on the map. I was aiming for a sub 48 hr time and came in just 48 minutes over that goal. I learned a lot and had fun and for me a faster time would have meant simply less rest/sleep and I have to return to work today, so I am glad I am not exhausted! I will also note that I will go back to pick up all my left over water caches this coming weekend, as I cached way more water than needed and did not have a strategy to carry out 7+ containers, thus I left a lot of water behind. If anyone is interested in learning more about this trail or planning for it, please don't hesitate to reach out to me. My email is: makiawellness@gmail and my social media is @milissajayn on FB and IG. I will also be posting a complete trip report on my blog: movingmountains.wordpress.net in the near future.