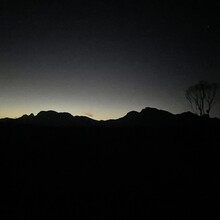 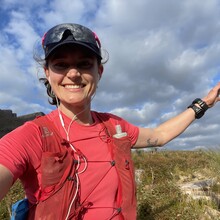 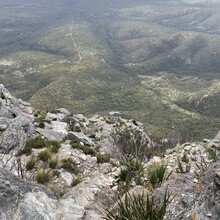 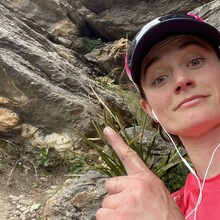 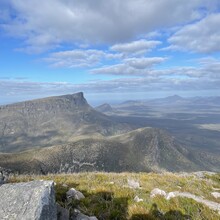 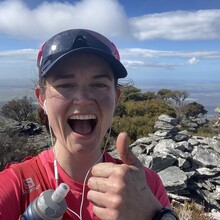 I set off on Monday 4 October at 4:43 am from the corner of Bluff Knoll Road and Chester Pass Road for an unsupported FKT attempt. I wanted to get started early, there was a front on the way with high NW winds and rain expected later in the afternoon.

The morning was still, a waning crescent moon sat on the horizon to the east. The sun rose as I ascended Bluff Knoll and I could see the headlamps of hikers already on the summit.

I carried everything I needed in my pack - water, food, PLB, emergency kit etc. I also had Richard Avery's Garmin Fenix as a back up watch and extra verification. After a wet winter, there seemed to be plenty of water around so I took 2 x 500ml and planned to fill water along the way.

I got to the top of Bluff Knoll around 6:20 am. There were numerous groups of hikers up there, enjoying the view in the clear morning.

The conditions were great - cool air, clear-ish skies and direr underfoot than I expected (it can get damn slippery up there when damp). The steep terrain had me in a real flow state. The climbs burned the quads and the downhills hammered the knees and I loved every minute of it.

Descending from the Third Arrow and across Bakers Knob I was joined by a hovering wedgetail eagle. The wedgie was the only non-human animal I saw.

The traverse around the southern side of Pyungoorup Peak was boggy and slippery. Around this section I was howling, hollering and singing at the top of my lungs to Helen Reddy 'I am woman'. I'm sure that was very amusing for the two male hikers I ran into moments later.

The track was drier than expected and I hadn't had an opportunity to fill water since the ascent of Bluff Knoll. Climbing Ellen Peak I realised I'd had just 1.5L over 4.5 hours and I felt a good bonk coming on. I tried to squeeze some water from moss....to no avail. I reached Ellen Peak at 9:20am and signed the hikers logbook. Summit fever reinvigorated me for the descent to the fire break and I knew I'd find water at a creek further down.

At the intersection of the track and the northern boundary firetrail I was, thankfully, able to fill up water from the salty creek. From there it was a painful, hot slog along the dank firetrail into a strong headwind.

I sprinted to a finish at 11:46am. After stopping my watch and catching my breath, I strolled back to chat to the Park Ranger who I'd sprinted past moments earlier. He must've been wondering what the heck some scratched and sweaty weirdo was doing appearing from the bush and sprinting down the road alone at midday on a Monday. This is a weird and wonderful sport.