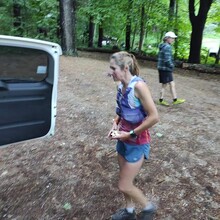 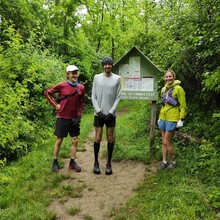 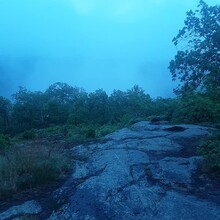 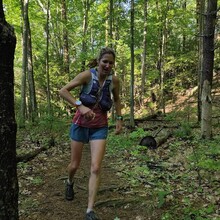 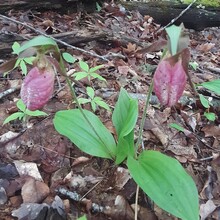 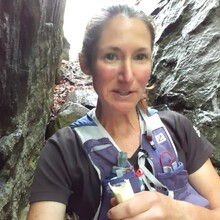 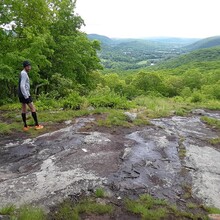 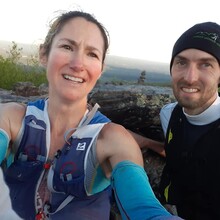 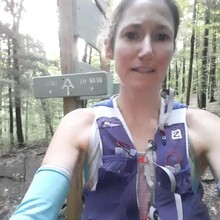 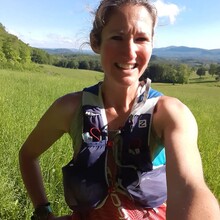 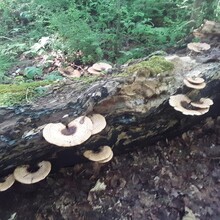 So....the plan was set for Memorial Day 2021! Nick Curelop, Josh Miller, Mike Spitzer and I planned on an FKT attempt of the CT AT! I did an FKT on the Mass section in September last year so just about 8 months prior so I knew where the CT/MA border was (and all the confusion about that that's been referenced by other FKT'ers!) They have new signs now but no specific sign that says 'welcome to Massachusetts!'

So, the plan was to go 'supported' style with Lee my husband 'crewing' for us, stopping at road crossings and parking areas for food and water pickups.  We had quite a few of these made possible by the access to the AT in CT! It's great! We started at 7.04am on May 31st 2021.  Josh started earlier than us at 6.10am because he knew he'd be going slower than us and hoped we may meet somewhere (we did at 15 miles in).  Nick, Mike and I set off at 7.04.  We kept a fairly good pace going and enjoyed chatting for awhile.  It was nice to run in the light and the temps were in the high 40s/low 50s with a high of 65 planned for 5pm that evening.  I don't think it ever got that warm.  I enjoyed the cooler temps for running.  Nick smashed the uphills and was always ahead of Mike and I but I cruised on the downhills and sometimes caught Nick if there were long downhill sections.  I was amazed how run-able the trail was compared to the Mass AT.  A heck of a lot less rocky!  By mile 15 we found Josh, after passing a cackle of Ravens who were very social.  Josh said he busted his knee from a fall and he pulled out at the next checkpoint.  By this time after that next checkpoint Nick was slowing a bit on the downhills and so was Mike.  Mike was enjoying leisurely stops at the checkpoints but I wanted to be in and out quick, after all it was an FKT as well as fun, but I wanted to set a new record.  At the next checkpoint some 22 miles in we had a water crossing; there had been rain heavy two days prior.  Nick and I crossed the water which was knee deep together and then after that I slowly pulled ahead of him.  Mike left after us.  I then found them all, Nick, Josh, Mike and Lee waiting for me at Belter checkpoint to find out they had pulled out at West Cornwall Road, doing 27.4 miles Good going guys!.  It was some what comical to see them all get out of the car.  At this point I knew it was just me, myself and I on the trails.

The weirdest thing ever while out that day happened at this point when I heard very loud race car sounds for what felt like hours and it felt close by.  I totally forgot that Lime Rock race track was nearby and god help those who don't know this as it's a weird sound when you're trying to enjoy birds and your footsteps! But Finally I came to a vista/lookout and could see Lime Rock Race track just down in the valley.  The sound continued for several more miles and when I met the guys I told them how unenjoyable that sound was for what felt like hours.

I had one more section alone which had a fair bit of road running in it, crossing through a Church community of houses and along a meadow field.  Then I met the guys at the final checkpoint where Nick said he'd do the final 7 miles with me to the border.  It was tough climbing up to Lion's head and when we got there I though that was the only climbing but then he reminded me we had some climbing to do for the summit of Bear Mountain.  What I wasn't prepared for was the descent of Bear.  It was SOOO steep! I had to sit down in places and scramble down.  It was also incredibly wet, so not only were my feet wet but my butt was wet too, soaked!

We reached the border at 8.03pm and I waited for Nick as he was slower coming off the descent.  I stopped my watch.  I noticed they put up a new sign since I was last there in September!  Lee and Josh were supposed to meet us at the border and run the 'just over a mile' trail back to the mount frissell trailhead but they were no where to be found.  There was no way I was waiting for anyone at this point I'd just assumed they were waiting for us at the cars, it was going to get dark real quick and I was getting cold with only my singlet and sleeves on.  So we turned around and headed for the connector trail to the parking lot.  We arrived to find our cars but no Josh and Lee!  I was cursing Lee and Nick said the only option was to go back to the sign because they probably went past the border (Josh should have known where the border was because he did the last section of the MA AT with me last year! and I'd told Lee about the issue with the confusion), so we started back; luckily Nick had two knuckle lights and he shared one with me.  We got halfway and we saw Lee up ahead running towards us explaining that Josh was thinking (wrongly) that the border was further along, so we'd just missed them.  So Lee handed us the keys and Nick and I headed back for the cars while Lee went to collect Josh.  I jumped in the car, so happy to be finished, drying off, changing into warm clothes.  I'd like to do another section of the AT soon!