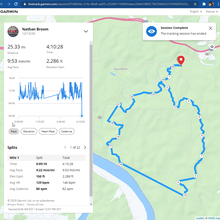 I really didn’t expect this FKT, and that made it feel like a gift. When Tanner dropped 32 minutes off my time earlier this year, I thought he might have put this one out of reach for me, but I found myself interested in trying again. It has been rewarding to see how much I’ve learned each time out on this trail, and how much room there is to improve--fitness, mindset, nutrition, logistics, etc. This mark is getting closer to my personal limit, but there’s always more to tweak as long as the desire is there.

I missed a few runs this past week, so I decided to head out for a long trail run on Sunday. I picked the AHT to minimize drive time, and I was planning an out-and-back route. The weather was nice (40s, overcast, no wind) so I brought a full vest in case I felt strong enough to go the whole loop. In the back of my mind was the thought that, if I didn’t get stopped by logging, I might push the pace in the second half and see how close I could get to the FKT. The Harrison-Crawford State Forest website has posted two logging reroutes on the trail this winter. This is the second consecutive winter they’ve posted six-month reroutes in those sections. I was prepared to turn back if I encountered active logging, but I was also prepared to continue if all was quiet--which it turned out to be.

In the first mile, I crossed paths with my FKT buddy Isaac, and I’m sure he figured what was in the back of my mind when I told him I was going “20, or maybe the whole thing.” That encounter probably put me more in the FKT mindset, and when I hit 10 miles feeling happy and grateful, there was no appeal in the idea of turning around. I felt strong for the first half of the distance, and my pace didn’t start trailing off as it had on previous runs. When I got to Lloyd’s Shelter around mile 16, I realized logging wasn’t going to stop me, and I was on pace. That’s when I decided this was in my hands, and I’d better go for it. That’s also when it got uncomfortable. My pace was pretty steady over the remaining miles, but my perceived effort increased exponentially, and I really worked for the FKT before it was all done. There’s no way I would have pushed that hard if Tanner hadn’t given me a worthy mark to chase. Around mile 19, I nearly ran into a group of hikers at an intersection of trails. One of them said, “Oh, hey!” It was my nephew with his Boy Scout troop. I was pretty ragged by then, but I think I managed to give him a coherent greeting before stumbling down the rocky slope I was descending.

After 20 miles, it felt like my progress was slowing to a crawl, but my actual pace seemed to hold. There were moments of pleasure after 20 miles, but fewer than before. The effort turned into a grind, but I was able to embrace it--along with the thought that it would end soon. When I crested the final rise on the home stretch, I saw some figures at the trailhead and slowly became aware that it was my wife and kids with cowbells and a vuvuzela. They had been keeping an eye on my Garmin LiveTrack, and realized I was going for the record, so they came out to cheer me in. That was a delightful end to a very rewarding day on the trail.

The trail is in good shape--probably the best I’ve ever seen it, thanks to the land managers and a lot of active volunteers. Logging will continue around Lloyd’s Shelter and Chimney Shelter this winter, and that may complicate any attempts until about May. I’ll be happy to see someone lower this time again, and depending on how low it goes, I might start dreaming again myself. Sub-4 isn’t that far away anymore….