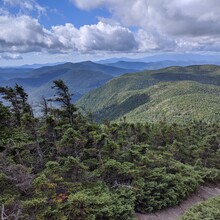 I just about died the last three miles trying to get this FKT. This is such a gnarly route. It also has a cool travel aspect- to see the Presidentials in full view at the end after "running" from Maine feels like an awesome accomplishment. The worst part was when I was climbing up one of many rock scrambles using my hands and I grabbed a pile of wild animal poop. That was gross! Also, when Teddy the dog wanted to run with me and his owner was calling for him and I was NOT turning back. The best part was the feel of September sunshine on the many above treeline running sections. So glad to finally give this one a try after three years of anticipation.