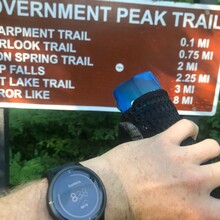 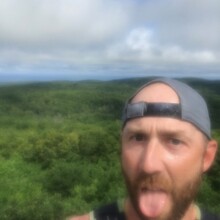 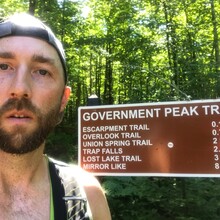 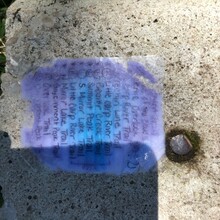 Our day did not start out very promising as a string of severe thunderstorms rolled through crushing my hopes of starting at 5am to beat the heat.  It was very severe weather so we basically just decided to sleep in and start as soon as we could.  Luckily, once the storm left the area it turned into a beautiful day, albeit very hot and humid.  We started at the Government Peak Trailhead just like Jeff and Randy before us.  Reading Jeff and Randy's reports were actually super helpful and spot on.  I thought the trail was muddy in the spots that I assumed it would be muddy but actually pretty runnable for the most part.  I had a pretty uneventful run...….until the dreaded overlook loop.  Joe and Allison you are diabolical for squeaking that little 3 mile nightmare in right at the end there :)  My quads locked up about a quarter mile into that first climb and I resorted to chewing on salt tabs just to keep the cramps away long enough to hobble up and down that damn hill.  I really wasn't able to keep a handle on if I was on pace to beat Jeff's time because I couldn't figure out how to do it on my watch...…but I got done and discovered that I had finished just under Jeff's time so that was fun. I was super worried about the bugs going into this, but I didn't find them to be a problem at all.  I would get the occasional fly but just used it as motivation to run faster :)  As far as food I basically brought gels and a snickers bar.  For water I used the Salomon water bottles with the built in water filter.  It was the first time I had used these things but they are amazing I would highly recommend.  So easy to stop and fill it up in the streams and not have to worry about getting sick.  I dont have a ton of pictures mostly because I was so completely drenched in sweat that the touch screen didn't work on my phone.  I managed to grab a steamy pic at the top of the summit pic tower.  Overall that place is insanely beautiful and the route was a great challenge.  Thanks for creating this FKT it was a nice weekend adventure/vacation for us.  Cheers!