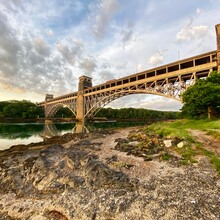 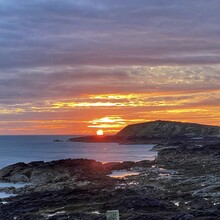 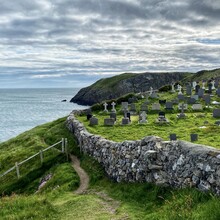 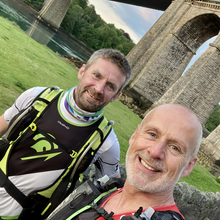 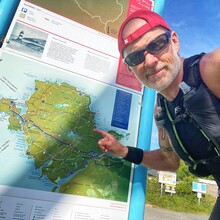 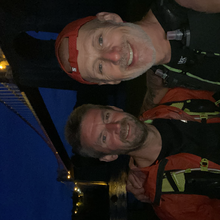 Last year I ran a solo unsupported lap of the island shortly after lockdown. It was an amazing experience. Dave, my running buddy from Delamere Spartans had originally planned to run with me, so when I suggested doing it again this year, we had just a few days to think about it and then basically just got on with it.

Similar plan to my solo run; no support or spectators anywhere, refuelling only from shops and cafes where possible, with one stash of kit at about 90 miles that we placed the day before.

We kipped in Dave's van in the car park of the Anglesey Arms on Sunday night so we could get an early start from under the suspension bridge. At 5am on June 7th we headed off clockwise on a nice warm dry morning. The pace was steady and knowing the island so well, nav issues were no real concern. Tidal times are the only thing to be wary of and we couldn't make it onto Llanddwyn as it was the peak of high tide. I had made a rough 40 hour plan with timings to try and get us to resupply points at crucial places such as Holyhead before the first night as there was a 26 mile stretch to the next location to buy any supplies or access water.

We ran pretty much to our timings on day one and hit 60 miles at Holyhead as expected. You lose a lot of time looking for shops, queuing and finding somewhere to sort your personal admin, making a self supported run that much longer than having a crew on hand.

The night was colder but still dry and we had a fabulous sunrise to greet us as we made our way to the top of the island. Day 2 started a bit murky and at the 90 mile drop bag I didn't top up sunscreen. Dave crucially also left his cap behind and as the day heated up and skies cleared to blistering sunshine that wasn't forecasted, we knew it would impact our speed.

For once my nutrition and especially hydration was on point. I often get dehydrated and then nauseous but I fuelled myself with milkshakes at every opportunity that presented and kept the dial in the green.

By the time late afternoon came we were into our last marathon and the impact of the sun showed it's effects on Dave, whose nutrition for once hadn't gone to plan. However, we slogged the last 9 miles from Penmon Point with determination and clawed our schedule back somewhat, getting ourselves back into Menai Bridge before 11am hoping for a pint before last orders!

I think FKT rule changes mean all pairs attempts are now classed as supported due to having a running partner to support you, but to me there's a massive difference between running it with no external support crew feeding you and handing you kit, etc and foraging around for it yourselves. I calculate our total time was increased by at least 3 or 4 hours. I only noticed this new rule after we finished, otherwise we might just as well have had someone follow us in the van and hand us food and drink and we would have been way quicker! Moving time was 34 hours 34 minutes. Total time 41 hours 49 minutes. Allowing some time for pauses; map check, selfies, taping up feet etc, that's a big difference! We didn't stop for any sleep, though we sat and had a lie on the grass for 5 minutes after sunrise on Tuesday.

However this was about a journey, not a serious record attempt. Anglesey has a stunning coastline to run round and it was just as inspiring as it was last July.

I was also over 5 hours quicker than my last effort without punishing myself badly, largely due to sensible drinking and eating to keep the engine ticking along.

I'm also a bit fitter than last year I think. What a journey and memories made.