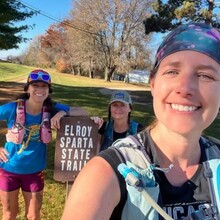 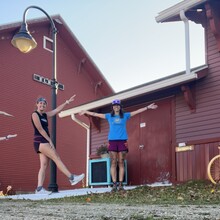 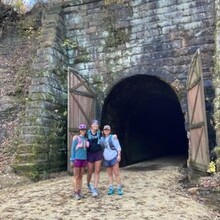 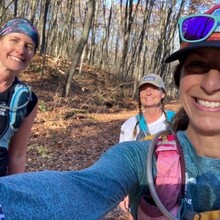 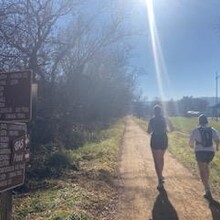 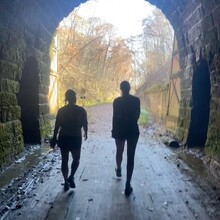 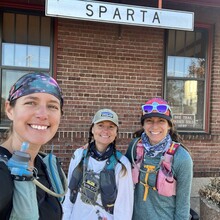 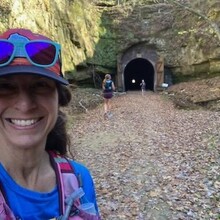 I (Nicki Donahue) have ridden this trail multiple times on my bike. I registered the route in spring and planned on doing a fall unsupported run.  This summer a friend and I scoped out the trail. We decided it would be smarter to run the trail from Sparta to Elroy. The trail starting at Sparta is more remote, with little cell phone coverage. I thought it would be better to start that way in case of emergency. I figured the chance of needing help in the first half was less than the second.

Note: bikers need a trail pass but runners do not.

Lucy, Ann , and I began our run at 8:50am in Sparta from the edge of the Sparta depot. Ann & I dropped Ann’s car at the finish, we drove to meet Lucy at the start. It was 29 degrees when we began but the temperature was expected to get to 65 by midday so we dressed in some layers at the beginning.

We all wore hydration packs with large bladders (using water, tailwind, and gnarly) with a variety of nutrition. I had called the trail office earlier in the week & they said the trail was still open. When we started running, we realized the bathrooms were closed & the water had been shut off for the season. We carried stinger shot blocks, granola bars, ritz crackers, peanut butter pretzels, gels, fig newtons, and some sugary orange slices.

Since we are trail runners, we typically run ultras on trails, we knew the flat path may get monotonous. We often hike up hills. We had a plan to run a mile & then take a quick (sub 30 second) walk. Our goal time was to beat the existing supported time Of 6:11 set by Jennifer Krzak in July 2022.

By the time we got to the first tunnel it was already warming up for the day. I had already shed my long sleeves shirt & was running in short sleeves and shorts. We were beginning to see some bikers on the trail.

We went through the first tunnel that was the longest tunnel. It is very dark and wet. Ann carried a flashlight. There were big ruts in the tunnel that were filled with water, we walked to avoid stepping in puddles & soaking our feet early in the run.

The trail is so beautiful between the tunnels. It was past peak color season in the fall so the leaves covered the trail. We could see rock formations that were usually covered by the leaves.

We ran through the second tunnel which was so fun. We needed our flashlights even through the tunnel was shorter.

Our slowest mile came at 26 miles. We were definitely doubting our goal time.

The last tunnel is really different from the others - you can see the jagged rocks.

Finally at the Kendall station, there was an open port-a-potty.

We decided to go for it with the last 6 miles to go knowing our time would be close. Ann played her “nighttime running playlist” including “red solo cup” & “ice ice baby” since we conserving our energy by not talking anymore. This last stretch was very long and straight. There were some bridges and beautiful streams but the scenery was getting less interesting.

We planned on finishing the same place Jennifer started, it is the intersection of hwy 80 & 71 where the gravel trail ended. Our watches all said between 33.8-33.9 miles. Our finish was right around 6:13.

We couldn’t believe how tough the trail ended up being for us but we loved our day.