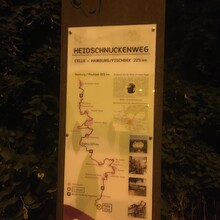 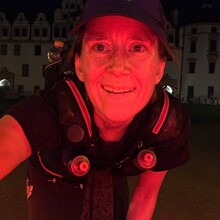 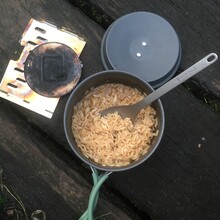 After loving the Heidschnuckenweg for several years as running and mountainbiking hometurf, I did the whole length running in (5) stages this April. After that, I new I wanted to try to reach Celle in one go. I wanted this as an adventure for myself and with myselt, a journey to re-connect and immerse myself in nature. So solo and unsupported it should be (plus, I did plan on a lot of hiking, so there was no sense in trying to beat Judith’s brilliant time). So I took an emergency bivy plus all the food I needed in my backpack and refilled my water bottles from streams and graveyard taps. And boy did I enjoy the simplicity of that kind of traveling. What you don’t have, you don’t need (but yes, it was damn hard to pass all those ice cream shops when the temperature was in the mid-thirties Celsius). The sunny weather was in my favour: I love it, it reduces kit weight immensely and everyone else hates it so even in the touristic hotspots it was surprisingly quiet. What an adventure.

Three technical bits: Where the track and real life where not congruent, I follwed the signs, not the track.
Shortly after Garmin’s k222, the Heidschnuckenweg was blocked. It said due to hunting – but as there was a lot of heli activity to bee seen and heard, I suspect some other emergency or training. There was no detour suggested so I took a medium wide one and was back on track at k227.
My Garmin did stop recording that one time I had to recharge (about three other times it worked perfectly), that makes for the straight line between k152 and k153. Although I did record on the phone via komoot for backup, unfortunately that track shows the same straight line. I am not very apt in things technical.