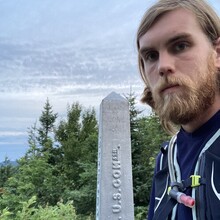 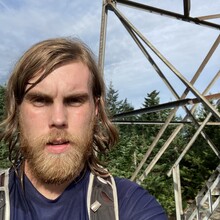 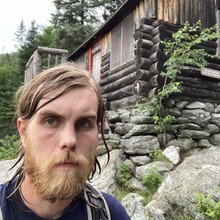 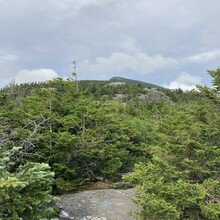 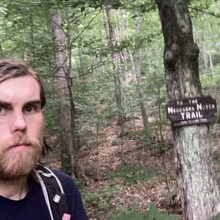 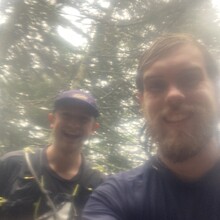 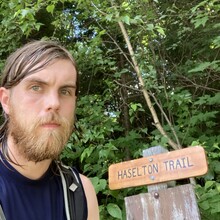 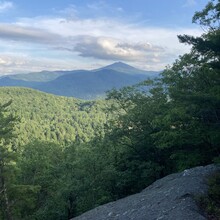 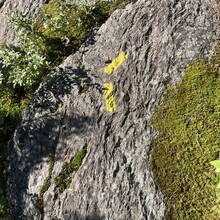 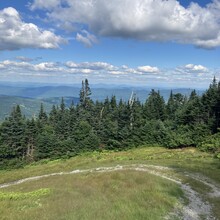 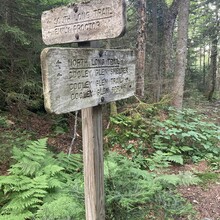 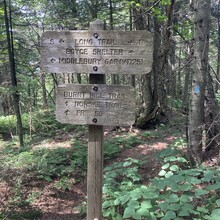 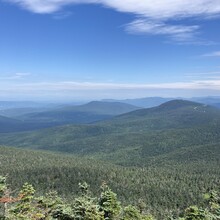 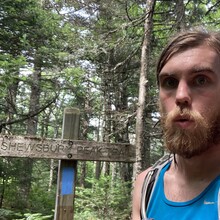 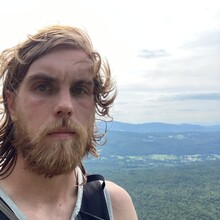 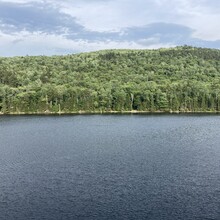 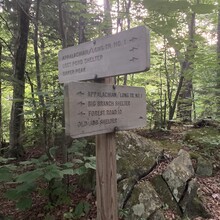 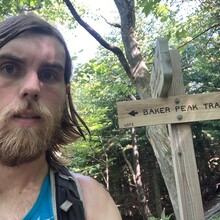 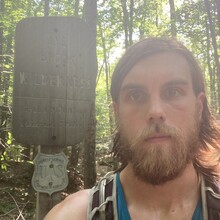 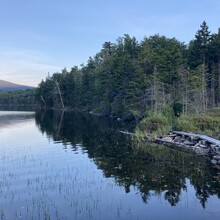 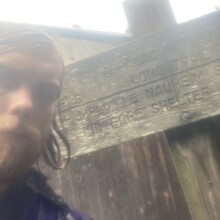 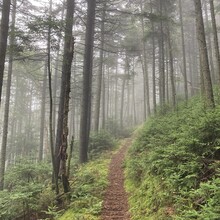 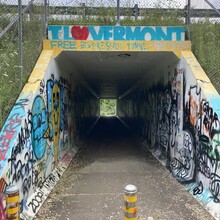 After a fitful night of sleep at the Journey’s End trailhead, compounded by a dueting pair of barred owls, I walked up to the Canadian border to start my Side-to-Side at 5:39:36 a.m. on 7/22/20. I scampered down the Journey’s End Trail back to the parking lot, which was my conservative starting strategy for the first two days — to let gravity help me out without getting into a true run. Looking back, I probably should have embraced running earlier.

My college xc teammate Mitch was my crewperson for the first three days, and he joined me on the Foresters/Frank Post loop. I allowed him 30 seconds to go up the fire tower but wasn’t about to join him. The view is great, but I know what it looks like, and I didn’t need another hundred uphill steps in my legs.

The Babcock and its associated Extension came and went in a blur, as did the Davis Neighborhood out-and-back. (I broke my no running rule there, because it’s literally just a road for ¾ of the way.) The meat of the day was Beaver Meadow to Sterling Pond. The Beaver Meadow loop is like a roundabout with three exits, so there was no way to avoid a mind-numbing out-and-back. The most efficient choice was to haul 800 feet up the Whiteface Trail, tag the LT, and drop right back down. Most efficient, maybe, but still draining.

At the Sterling Pond trailhead, I felt good enough to decide to take a bite out of the next day’s Mansfield itinerary. The climb to Butler, through the Rock Garden, down Frost, and back over to Lake Mansfield was challenging at the day’s end, but I was glad to get it in with rain forecasted for the morning. Mitch and I enjoyed a night at our friend William’s house in Stowe.

Rain poured down as William and I set out up Hellbrook the next morning. Like many trails on Mansfield, Hellbrook is treacherous when dry and triply so when wet. We tagged the Adam’s Apple, went back down to the Cutoff, up Profanity, and into a brutal down-up on Sunset Ridge and Laura Cowles. There William left me to start a solo trip through the Canyons. Despite being the lead caretaker on Mansfield last year, I had never done the Canyons in the rain. Everyone knows not to. There are so many spots where a slippery foothold makes progress borderline impossible. Still, I brute-forced my way through in around an hour, an absurd time even for trails that difficult. It was such a relief to jog down the Toll Road for a half mile, since that section is technically a part of Haselton. From there I hit Amherst and Cliff, where progress was a little faster despite further technical challenges. I skittered down Halfway House and up the slabs on Maple Ridge, tagged the Forehead, and picked my way down Wampahoofus to Butler. From there it was a somewhat simpler traverse up the Forehead Bypass, across South Link, and down Haselton to where Mitch was finally waiting with the car.

Upon exiting the car at Duck Brook, I realized that chafing had become a serious issue in the rain. Fortunately, I was able to fashion some accessories out of self-adhesive tape to keep the offending parts away from each other, and it was a pleasant trip down the old LT with the rain having finally abated. At the bottom, I made the call to backtrack substantially to my living quarters in Waterbury Center for a shower and a bed. It was worth it from a sanity perspective despite the lost time.

The next day began with a tour of Camel’s Hump. Spirits were high with beautiful weather, and Mitch was able to join me for almost the whole route. Then it was on to the Beane and Hedgehog Brook, and the flat stretch of the LT between the two provided the first real chance to recover on the move. I slogged up the silly Mad River ski trails (which really shouldn’t be a part of the challenge), jogged down Jerusalem, and finished strong on Battell. I considered pushing into the night to Cooley Glen, but conservatism prevailed.

The Breadloaf Wilderness is another area where the trail design makes for an unfortunate out-and-back. I tagged Cooley Glen to start the morning and came right back to the trailhead to start the Emily Proctor-Clark Brook up-and-over. The top of Emily Proctor was the first deep low of the journey. That climb went on forever. Finally I reached Clark Brook, where new crewperson Lorne was there to pick me up (and dig some waterbars for good measure).

The rest of the day was a series of mostly short hikes, often out and back. While the format was mentally challenging, the enforced car breaks were welcome. I felt great until Chittenden Brook, where I crashed and walked it in for the last couple miles. The prospect of New Boston, an easy 2.4-mile out-and-back, was daunting. Lorne saved the day by casting me as the ATV and himself as the trailer, and together we “hauled lumber” for the new privy we’re scheduled to build at the David Logan Shelter later this year. I could go as fast as I wanted, because I was an ATV. This powered me effortlessly up the trail, giggling the whole way.

The next morning started with Deer Leap, Pico, and Killington. The miles breezed by, and I grew more confident about running. Then Shrewsbury Peak destroyed that confidence with a stiff climb to the summit followed by an out-and-back double whoop-dee-doo to tag the LT before descending the snowmobile trail on Black Swamp. Exhausted, I decided it was time for a shot of taurinated Mio. Gurgle a mouthful of water, open the cap, and squeeze as long as necessary. Works every time. Boosted by the performance enhancer, I bolted up and down White Rocks Cliff and up Homer Stone Brook. Then, of course, came the crash. It took a playlist of salty songs about ex-girlfriends to make it down the Green Mountain Trail and its Connector.

I started the next morning by taking a long-disused forest road shortcut to the LT near the Old Job junction. Then it was up Old Job, out and back to the Griffith Lake trailhead, and down the Lake Trail with a spicy climb to Baker Peak thrown in. Aside from Baker Peak, the trails were getting much easier, and I was pleased to cover 15 miles without much effort. Then it got hot. I am notoriously poor at dealing with heat, and despite trying to pace myself, I suffered through the Lye Brook Wilderness as the heat index cracked 100. On the most runnable trails in Vermont, I ran a total of maybe 3 miles and just trudged the rest. Finally, the sun dipped and I had a magical trip to Stratton Pond, feeling fresh again as I started to smell the finish line. I pushed into the night and headed for the Wanderer Trail on the Stratton ski slopes. This trail is even dumber than the Mad River ones. There is no path, just a random series of slopes with nothing to delineate the path except the red dashed lines on my Avenza app. I watched obsessively as my little blue dot followed the lines to the Stratton Tower, and then descended on a route that toured Stratton’s finest maintenance sheds and parking structures. I was tired and defeated, and my feet hurt like hell. My crewperson McV was somehow more tired than I was, so I drove to the Little Pond trailhead for a few hours of sleep in the car before the final push.

Heading up the road to Little Pond, I rued the decision to rely on other people’s vehicles rather than rent a truck for the week. This cost me a total of 6 or 7 miles on high-clearance access roads, and by this point, my feet were feeling the extra 6 or 7 miles. Blisters abounded. New ones popped up as fast as I could drain them, and I had to abandon the effort and try to embrace the pain for the last 28 miles. I powered up the LT to Goddard, getting soaked by a thunderstorm in the process, and arrived to a shelter full of teenagers who had no inclination to make room. I huddled under the 2-inch overhang and ate soggy crackers while they gossiped and giggled. It was miserable, but it got me out of Goddard quickly. I traversed the soggy yet stunning West Ridge and dropped down to the Woodford trailhead. Despite the finish line being 10 miles away, I sat helplessly on my bear can in the parking lot for a half hour before mustering the strength to go back up Bald Mountain. Descending into Bennington, I started to move faster even as my feet screamed for mercy. Mercy would come, but not until a celebratory run down Broad Brook. Having spent four years running at Williams, I can run Broad Brook in my sleep. This is good, because I was falling asleep on my feet. I bombed down the trail with only the one brief mishap of dropping my phone in the brook on one of the crossings. Thankfully, the GPS persevered, and I sprinted into the Broad Brook parking lot at 4:26:19 p.m on 7/28/20 for a total elapsed time of 6d 10h 47m 43s.

In retrospect, the two ways I could have saved substantial time were by running more and sleeping less. I regret being afraid of running too hard early on; it wouldn’t have killed me. Having never trained myself in sleep deprivation, I didn’t want to screw myself over, but it’s certainly something to work on for future long efforts. I’m sure many people faster and stronger than I could take a lot of time off this record, and I hope they go for it! The Side-to-Side is a unique adventure that showcases a beautiful cross-section of Vermont. If anyone is interested in making an attempt, please feel free to reach out about the logistics. Finding the most efficient route is a thorny puzzle, one that I enjoyed perhaps more than the run itself.