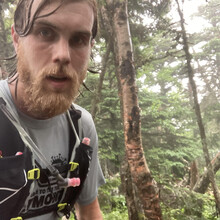 I drove to the Whites this morning with no plan. Lincoln Woods was fairly quiet thanks to the morning drizzle, so I parked there and started up the trail still unsure of my destination. After a while I was feeling good and decided to increase my effort a bit, summit Owl’s Head, and decide at the top whether to take a shot at the record. The rest of the approach was uneventful, although I lost some time and rhythm at two of the Lincoln Brook crossings, once getting stuck behind a tentative family and once being unable to pick up the trail on the other side. I reached the herd path in 68 minutes and steeled myself for the real climbing. The slide was actually a good deal less technical than some of the trails around here, and I reached the top at 1:34. At this point I decided to go for the record, which was officially 2:54:13. My hope was to go sub 2:50 as there was a rumor of that having been done. I picked my way down the wet slide in 20 minutes and then started rolling. The brook crossings went better this time, and soon enough I was back at the Franconia Brook Trail and could really fly. The last couple miles were HARD, but I was able to keep it together and make it back to the kiosk in 2:48:23.

There is certainly time to be had out there. I could have gone faster at the beginning with no more effort. The real silly part of this was that I carried supplies for a much longer adventure, including 2.5L of water, two sandwiches, a bag of cashews, and a variety of bars. I drank most of the water just to get rid of the weight, but everything other than a single fig bar went uneaten. So it goes. Fun day!