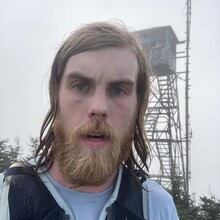 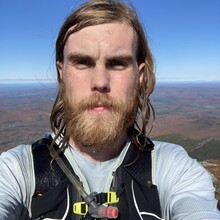 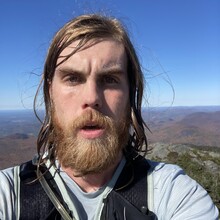 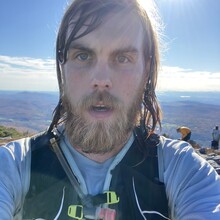 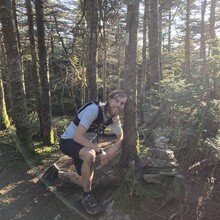 Since the clock stops on the final summit, the optimal order for the Vermont 4000-footers seems to be Killington-Mansfield-Camel’s Hump-Abraham-Ellen. It’s awkward and counterintuitive, and I was certainly questioning myself on the long drive from Killington to Mansfield, but not having to count the return trip from Ellen saves a ton of mileage. I drove down to Killington from Waterbury through some intense thunderstorms on the evening of Saturday (10/10/2020) and slept poorly in the car in the Sherburne Trails lot. As day broke on Sunday 10/11, I slugged some coffee, hit the strategically placed portapotty in Killington, filled up on gas, and made the short drive to the Bucklin trailhead.

I started up the Bucklin Trail toward Killington at 7:15 a.m. With gentle grades and good footing, the first two miles were both a good warmup and an exercise in patience. I kept it reined in as the trail increased in difficulty and reached the socked-in summit in 48 minutes. After making it down K-Spur in one piece (never a given!), I got into a good rhythm going back down the Bucklin. Patience was again key, especially on the lower section, where it would have been easy to drop a 5-something mile that would have ruined the rest of the day. Back at the car, I stretched for a minute before settling in for nearly two hours of driving up to Mansfield. The drive was pleasantly uneventful, and I found a prime spot in the hiker lot at the base of Stowe.

Before heading out, I attempted to chug some maple syrup and instead spilled it all over myself and the car. I gave myself a hasty bath; the car would have to wait for another day. I started up the Long Trail to Mansfield and immediately started to pass people. The rest of the day would be a ceaseless stream of “get out of the way” cleverly disguised as “hey, how’s it going.” I felt strong on the climb, but Mansfield is a much burlier mountain than Killington, and progress was accordingly slower. The trail became icy above treeline, demanding caution for the last quarter-mile. At the summit, I spent 30 seconds asking people to get off the sedge before turning around for the descent. Descending off the north side of the Chin is challenging even in dry conditions, and I had to be exceptionally careful on the icy rocks. Dropping below treeline was a welcome relief. I nailed the rest of the descent and arrived back at the car feeling great.

The drive to the Burrows trailhead took longer than I would have hoped, as I had to take back roads through Waterbury Center to avoid the huge logjam of tourist traffic around the Cold Hollow cider mill. At the trailhead, cars were parked over a half-mile down the road on each side, but I was fortunate to find a recently vacated spot near the top. The climb up Camel’s Hump felt good, though Burrows always feels way longer than 2 miles. The descent was less smooth, especially since I had to pass people every 15 seconds. I must have been getting grumpier, because people just glared at me as I went by instead of cheering me on like they were on Mansfield. Finally I reached the bottom and drove to Lincoln Gap with a quick bathroom stop at the general store in Lincoln.

The parking situation at Lincoln Gap was even more ridiculous than at Burrows. Again I was lucky enough to find a good spot, this time almost directly in front of the trailhead. I saw my friend McV, who was packing out from his shift as the caretaker on Abraham, and said a quick hello before starting up the Long Trail. Within the first few steps, it became evident that my body was not going to work as well as it had on the first three peaks of the day. My threshold for hiking vs. running shifted dramatically toward hiking. However, I was still hiking quickly and made it up Abraham in decent time. Heading toward Ellen, I was grateful for the stretches of flat ridgetop running, because neither uphill nor downhill were particularly appealing at the time. I didn’t know the section between Abraham and Ellen very well, and the little bumps along the ridgeline felt interminable. Then the summit snuck up on me, and I had to spend several seconds fumbling with Strava to stop the timer. I finished in 9:25:47, a new self-supported and overall FKT. It was a great day to be out in the mountains!

Nice! Prior to getting confirmation of support, the long drive seemed to make total sense. Good call on the LT for Mansfield, especially if hell brook is wet! Congrats!