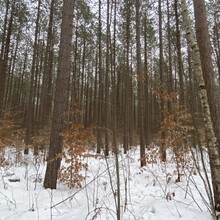 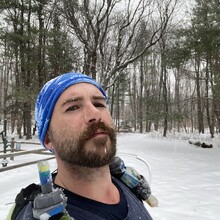 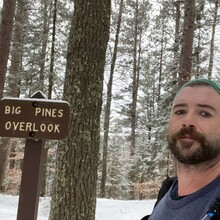 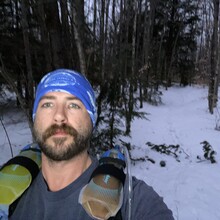 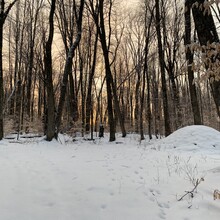 I drove the Rapid River Truck Trail, which somewhat parallels the course, up to the north trailhead to get a look at the snow (more than I hoped to see) and get a feel for cell service (not great).  I parked at the trailhead, which was unplowed, before daybreak.

I had a 3L water bladder in my backpack along  with two concentrated sports drinks. I put sheet metal screws along the perimeter of my shoes. I slightly overpacked with some emergency/first aid stuff and overall was probably carrying 14lbs of gear and water.

I set up my Gaia GPS first, got ready, and then started Strava to record on a second phone, which I put in a plastic bag near a heat pack at the top of my backpack. I had also intended to do a workout on my Apple Watch, but my wet sleeve kept messing with the touchscreen. I set out at daybreak, just before 8am.

According to the snow depth chart from the day prior, the first third of the route would be directly in the area of the UP with the deepest snow so far this year. It was at least as tough as I expected . I have some experience running in snow, but this was my first snow run of the season, and even a couple snow training runs go a long way towards getting your “snow legs” back under you.  Snow was 12” in several sections and sometimes had thick mud underneath. Some areas had prior traffic from deer or hunters underneath the fresh snow, and some was unbroken trail. It was just below freezing in the morning but I still managed to overheat several times pushing through the snow.

I spent the middle third doing a combination of light running and power hiking through what was now 3 to 6” of snow, trying to recover from the first section. It had started snowing some more, but it wasn’t too extreme. Actually made for a peaceful setting. I stopped just past the halfway point, changed my socks and headband, and reorganized my pack. Overall, the trails in the middle section were easier and more runnable than the first. On average, I probably came across 1 downed tree per mile on the entire course.

The final third of the course had snow cover of 4” or less. These trails were more runnable due to less snow, but not as flat as the middle section. I ran out of water at around 25 miles. I had hoped it would hold out until the last 10miles, but recovering from the deep-snow running had it’s price. As such, I was pretty spent, and could not take full advantage of the better running conditions. This section was also more difficult to navigate, with several trails and old roads meandering through each other. Didn’t help that the last couple hours were in the dark. GPS was key.

My phone recording in Strava stayed working the whole time (whew!) and clocked it at almost 42 miles and nearly 12 hours. I think due to my slow pace, the gps had more pings per mile and more accurately counted the distance. I think this course is in fact over 40 miles, as I didn’t get lost or backtrack at all.

-Gaia GPS. This was my first time using it. I downloaded the app specifically for this attempt, and the ability to download the USFS trails map in particular was excellent. It included the full trail I was running, and every current and defunct logging road. This gave me peace of mind that I could extract myself effectively if things went bad. I had to charge my phone running the GPS with a portable charger at halfway or I don’t think it would have quite lasted the 12 hours. I found there were several small sections where the actual route was a little different from both the dotted line on the map and the gpx file from this site. I do think the route Strava recorded was slightly more accurate than the gaia, however.

-Straw type water filter. I almost didn’t bring it but it’s light so I strapped it to the outside of my pack. Doing this unsupported, I advise bringing a means of filtering water from one of the streams along the trail. I stopped to use it once and drank quite a bit.  It may have been the difference between being able to finish or tapping out.

-Weather. In the low 30’s with no wind to speak of, weather was perfect for a winter run.

-Snow. There were a few sections where the semi-sticky snow was likely preferable to the mud or rocks underneath. The soft snow was also easy on the knees.

-Nutrition. My stomach felt good and I was able to keep ingesting calories (a fun-size snickers every 2 miles. Not a fine-tuned nutrition plan, but It did the trick and stayed palatable).

-I attempted this on a whim. I’m 30 lbs over fighting weight and haven’t done any trail runs longer than 20miles this year. This was also my first snow run of the year, and my longest run ever. All of these things were factors.

-Wet feet. Gaiters helped, but it seems my old speedgoats are no longer waterproof.

-Snow. Running in deep snow is not the fastest way to get this course done.

-Night. I had a headlamp and a small high-quality hand-held light, but if I knew I was going to spend a couple of hours in the dark, I would have brought my brighter/heavier lamp.

Notes on doing this unsupported:

-I think I left a lot of room for improvement on this time.  It’s a pretty flat trail overall, but it has its challenging sections. I can see it being very messy in the spring and soft/sandy with high humidity in the summer.  My last five miles were nearly snow-free, yet the ground was frozen. I think this is the best one can hope for. If you can run this in the fall when the ground is frozen and the air is cool, but the snow hasn’t started, that might be best.

-This is legitimately the wilderness. Respect this, especially if you are running unsupported. Cell service was better than I expected, in that it did exist occasionally. I didn’t see a soul on the trail the ENTIRE DAY, except for waving at a guy driving a propane truck at a road crossing near the beginning. I saw a couple vehicles through the woods on the Rapid River Truck Trail, but traffic was very light. Don’t count on someone coming by quickly if there’s an emergency. There were a couple of deer blinds and bait piles along the course, but no one was in them.

Overall a pretty cool trail through a mix of several different forest types. I’m glad I did it, and now running the full lake-to-lake is on my bucket list.

FINAL NOTE:  Big shout-out to my friend for waiting much longer at the southern trailhead than either of us had hoped. A cold beer, some snacks, and a warm ride back to my truck was everything at that point. Thanks Shaun!