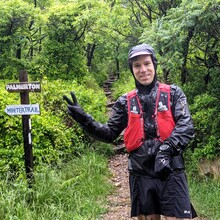 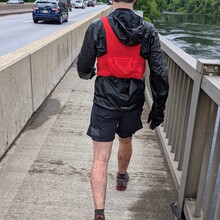 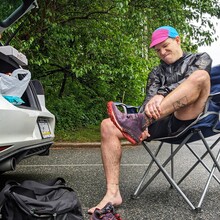 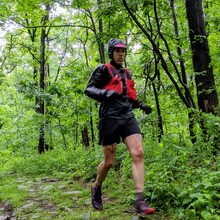 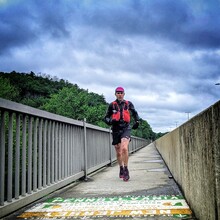 When a break in the heat showed up on the forecast over Memorial Day weekend, I knew I had to give it a go on my backyard section of the AT. I sent a message to friends Jim and Ryan that I might try the run, and Ryan immediately offered to crew, which I couldn't turn down.

Starting at 8:02 under a decent rain, I headed Northbound on the AT from Lehigh Gap, beginning with a 900+ foot climb that involved some short scrambles over rock piles to reach the ridge. My feet and hands were wet from the first step, but oddly enough I tend to run well in the cold rain. About two miles in I saw the smallest deer I've ever seen, and it must've been really scared because it just laid down on the trail and acted like I couldn't see it. I should've taken a photo, but I was out for a fast time!

The first section wasn't overly technical after the initial climb, and I hit the first road crossing in about 55 minutes at Little Gap. I only exchanged one flask of water and took an extra gel for the next section of about 8 miles. A short climb behind Blue Mountain Ski Resort led to a nice rolling ridge section where I could settle into a rhythm, when I wasn't getting smacked in the head by low-hanging leaves.

Jim showed up at the second road crossing at Smith Gap, about 12.5 miles in, and I exchanged both flasks and restocked on gels. Another 8 mile section of similar terrain went pretty smoothly, and Jim came about a mile up the trail from Wind Gap to run back down with him. He ended up hitting a branch somehow and falling, but once I heard him say he was good I kept running. He's fast enough to catch up!

I swapped bottles again at Wind Gap, and made sure I drank more of the ones I was leaving because I tend to not drink enough. The climb out of Wind Gap was pretty steep, straight, and short, so I just hiked up to the top, knowing there would be more ridge running, although this would be the rockiest section. The rocks weren't big, but they covered the entire trail, making sure there was no decent spot to land my feet. After about 7 miles, I reached the Wolf Rocks outcropping, a pile of slick, slanted rocks that brought the effort to a crawl so I didn't slide off and get hurt. The rocks were feeling feisty in the rain. After descending off the rocks and onto some smooth dirt trail I pushed a bit harder to make up some time until the last road crossing at Fox Gap.

I drank more of my bottles once again, no use bonking in the last 7 miles. I had an hour and a half to run it in order to meet my goal of sub-7 hours on the route. I got some extra sugar from a Coke and took off again. This last section is a part of the DWG Fatt Ass 50k, which I have run many times and am very familiar with. Knowing the terrain helped me relax a lot and settle into a rhythm to cruise in to the finish.

Jim ran about a mile and a half up the trail to meet me and run in to the finish. Even in the rain there were still a good amount of hikers on that section heading up to the overlooks. After hitting the final trailhead and making it onto pavement it was time to push to see just how fast I could make the new time. I was well under 7 hours so I just wanted to get every last second out of the run I could, and test my speed legs. I hit the bridge and pushed to the PA/NJ state line, crossing the marker in 6 hours 49 minutes, and 18 seconds.

The weather may look miserable in the video we recorded, but it was so much fun splashing through the rain for a day.

So awesome!! Congratulations. Thanks for the thorough report.