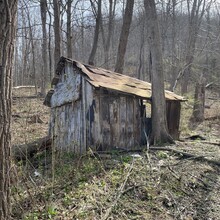 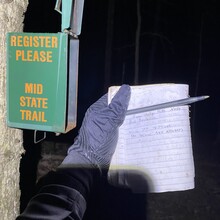 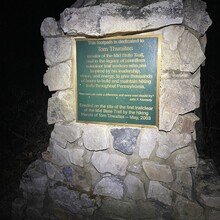 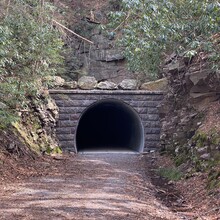 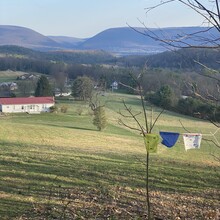 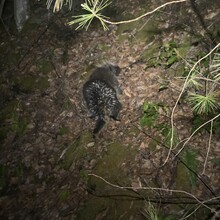 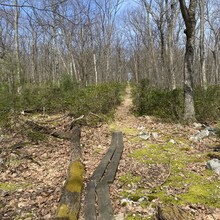 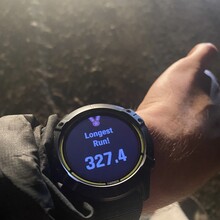 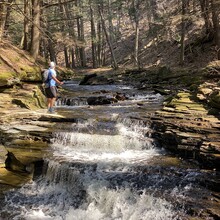 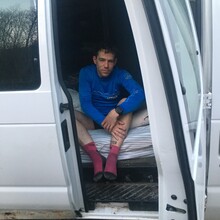 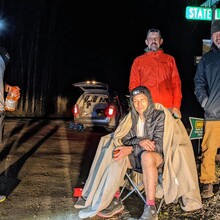 I started at 4:05am at the Maryland/Pennsylvania border, at the sound of a rooster crowing on the farm adjacent to the start. Heading northbound, in the same direction as Eric Kosek, I ran supported by a main crew of great friends Alex Papadopoulos, Rick Moyer, and Chris Rush.

The first day covered what most refer to as the toughest section of the trail. Primarily traversing ridges on private lands, many times, the only evidence of the trail was the orange blaze on trees, while the forest floor was covered in PA's signature baseball sized rocks. Kunal Patel also joined on the first two days to help crew and pace, and he was a huge help in making day one go farther than planned, ending the day in 23h30m at the town of Williamsburg, over 120km into the 527km metric trail.

Day two began with 12 miles on the Lower Trail out of Williamsburg. Admittedly, I find the flat running to be the most difficult, as it as the least mental stimulation (no winding turns or technical trail features to keep my mind engaged). But after the rail trail section was complete, it was back to more ridges and rocks. Eddie Pantoja and Steven Larick joined the team around midday to help crew and pace. They wisely convinced me to change a pair of slightly wet socks, saying there was plenty of time for them to dry out and be used again. Eddie ran with me for the next section, climbing up one of the taller climbs on the entire trail, and through some more technical terrain. By sundown we had passed by State College, probably the most populated town near the extremely remote trail. Clayton Bouchard met up with the crew there to help out for the night, and provided me a warm place to sleep in his camper on what might have been the coldest night on the trail.

Day three traversed mostly state forest lands, and with them, better developed trails that see more foot traffic than previous sections. It was a nice break and allowed for some more fluid (and faster) movement along the route. I covered ground quicker than expected in some sections, making up for the previous day's slow grind. After a two mile rail trail section out of Poe Paddy State Park, I actually missed my crew, making the section double what was planned. Alex whipped out the maps for the trail and managed to intercept me on a forest road and give me some more hydration that I otherwise would have rationed. Up to this point, trailside water sources were scarce, due to the ridge running, or springs located on side trails required descents of hundreds of feet, not conducive to making quick progress. As we jumped from park to park the metric nature showed as we underestimated the height of some of the climbs. At one point Alex mentioned the coming section had some rollers, mostly 100-200 feet tall, which we realized later were 100-200 meters tall ! It was a sigh of relief to know they were taller than we thought, and not my own tired legs. The night's stop ended up being 3km further over one final mountain, as the road we planned to stop at wound around, and the crew picked the further distance.

Day four is when the weather started warming up. Starting off with a couple short sections on a plateau, I made quick progress, aided by the previous night's extra distance. Alex had to leave to return to Virginia. Then came a long solo section without aid. Under the hot sun, I made my way over two mountains into the northern section of the trail, hitting the 200-mile mark. In the late afternoon we made our way into the town of Woolrich, where I was joined for some miles by Reagan McCoy, who gave us some intel on the coming section until he turned around to head back to town before sunset. The night's sections brought us onto the Eastern States 100 route that uses the Mid State Trail, although traveling in the opposite direction of the race. At the second to last aid station for the night, we checked the weather, noticing a storm north of our location. Without any indication that we'd be affected by it, we set out without rain jackets. While we didn't get completely unloaded on like the radar showed. Eddie and I did get wet weather for about 20 minutes, and kept busy by counting the time between lightning flashes and thunder. The night ended at Little Pine State Park.

Day five meant the longest back to back sections of the route. To start, two 20km sections in a row under once again warm conditions. Luckily the state forest trails in this region are well maintained, and I was able to do a fair amount of faster running. The heat of the day came as I climbed to Gillespie Point, over the town of Blackwell. I had been feeling the heat, and Chris ran the route backwards from the aid station to meet me and pace me back to the cars. They had done some laundry during this section, so I was able to put on some new socks and get a short rest after the heat before running into the night. Eddie paced the night once again, and we started to see our first of many porcupines along the trail. There were a few steep and quick creek crossings on this night, which ended with a wider stream just before meeting up with the crew. We could see the cars, and Eddie went up and retrieved a pair of shoes for me to cross the creek in, so I could save my current pair for later miles. The day's final section was possibly the most interesting of the entire route. Once again more porcupines, but also a number of old mining sites, some weird acid mine drainage effects in a few water crossings, and a rock cliff section that would be really interesting to visit on its own. As we descended to the cars, Eddie decided that on the last day, he would run all 57 miles with me. I'm convinced he must have run at least half of the Mid State Trail himself on this trip.

The final day was a long push. A big goal of the run was to lower the day count from Eric's adventure, and we knew it would be difficult. Eddie ran with me, to keep me hyped up, help wayfinding and encourage me to run more than I may have previously to ensure we had plenty of time before hitting the full 6 day mark. Once again the trail entered private lands, and with them, some more difficult trail conditions. Traversing farms without much shade made the middle of the day tough and slow. Eric Kosek actually came out to encourage us and push us to move quicker. His daughter Lauren ran with us along the Hills Creek lake, which was so much fun, and gave us more energy as we entered the night. The next few sections had trails similar to what I normally run on, and while I was on tired legs, the muscle memory showed its strength and we made it to a few stops before Rick and Chris expected us. When we arrived at Hammond Lake, we were greeted with two great surprises. First, Pete Fleszar, from the Mid State Trail Association came out to meet us. It was great to see that the people who maintain the trail were excited by what we were doing. Then to my complete surprise, one of my closer training friends Jim Blandford, had driven up to meet us for the finish. We tried not to stick around too long as the clock was ticking and we were within 20 miles of finishing. The long final day took its toll on a few sections, as we struggled to find blazes in the thick forest on private lands, referring to maps to confirm we were on the right track. And then I began yawning. Once I start yawning, it's only a matter of time before I start falling asleep mid-run, so Eddie worked hard to keep me talking and moving around to keep my energy up. Running around Lake Cowanesque, the final lake, the blazes were hard to find as they were hidden by tall grass and downed trees. We also learned that the crew had difficulty and were parked two miles farther down the trail than planned. While it made the sleep deprivation harder to manage, it ultimately meant that once we reached them, the finish was even closer. The final 9 kilometers included traversing more of the lakeside trail - Eddie ran ahead to confirm the trail's location, so I could focus on moving quicker as we crossed 5 days and 23 hours. The final turns were a little tricky leaving the park, so the crew parked their cars and directed us in the right direction as we made our way to Hefner Hollow for the final climb. The last hill had a few steep sections forcing us to hike, but we tried to run, however slowly, to finish in the best time possible. Just before 3:50am on April 9th, I reached the Northern Terminus of the Mid State Trail.

Awesome!! Thanks for the great report, and congratulations on the FKT.