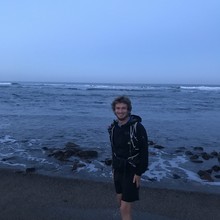 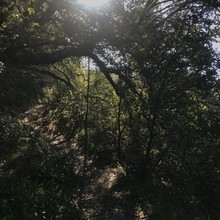 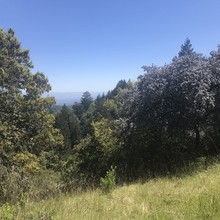 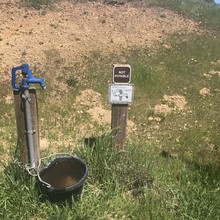 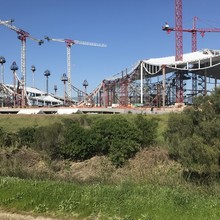 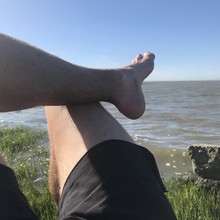 After some good exploring the last couple of months, I can say definitively that the Skyline to the Sea in Big Basin Redwoods Park is now my favorite trail in the Bay area. I’ll say what Paddy O’Leary said about the East Bay Skyline trail--- stop what you are doing and do the Skyline to the Sea.
I ran out and back on the Skyline to the Sea a few weeks ago and loved it, despite lots of suffering. There was much less suffering this time as I took my time and enjoyed all the new wildflowers that weren’t there just 3 weeks ago. The route starts at Waddell beach and climbs over the Santa Cruz mountains to Saratoga Gap and then over to Black Mountain and finally down through Mountain View to the bay.
I started at 6:09 AM by touching the cold Pacific Ocean. I felt pretty slow to start—I think the last couple months of running are starting to catch up to me and my legs just haven’t been able to recover fully. I had almost 2.5 liters of water to start so made it to Waterman Gap before having to refill. I took a long stretching break and ate my bagel, dried mangos and nuts.
I arrived at Saratoga Gap in 5 hours 36 minutes. Between here and Black Mountain was all new to me so I slowed down a bit to look at directions, although it was fairly straight forward. I struggled up the steep and exposed incline to Black Mountain and had to ration water. There is a ‘non-potable’ spigot near the top of Black Mountain that I haven’t tried before but it looked fine to me and I was thirsty enough to drink much worse water. I’m feeling fine 24 hours later but do prescribe to Yvon Chouinard's crazy theory and often sip water from sources most wouldn’t, so I think I’ve got a strong stomach.
After summiting Black Mountain, there were some fairly steep downhills that gave my knees a lot of trouble. It’s crazy for me to think but I like going uphill more than down these days. I used to fly downhills but that was normally after walking up or only running a mile or two beforehand. When I try that on tired legs, it just doesn’t work.
At Deer Farm, I asked an Open Space volunteer where the water spigot was but she didn’t know so offered me an extra water bottle. I was either excited to talk to someone at that point or forgot about going unsupported but I accepted, which of course was stupid because there was a water spigot 20 feet away and I didn’t really need the water. It doesn’t really matter—it’ll give me an excuse to do it again fully unsupported. But it also gave us a chance to chat and for reasons I don’t quite understand, she was very excited to trot her horse next to me while I ran. Unfortunately, after going the wrong way, we realized horses couldn’t go the way I was supposed to go so it ended quickly. But we traded numbers and plan to do a run/trot together soon and I’ll get to see if I can keep up with a horse.
Then it was about 7 miles through Mountain View to the bay. I soaked my feet in the bay for a bit before walking the 1.5 miles back to the nearest street to get a ride home. This was the first long run that was pure fun—I didn’t bonk, get painful blisters or chaffing, run out of water or dead legs, etc, etc, etc. Maybe I’m learning? It’s a process, for sure.

Fun report and congratulations!  I totally agree with you on the S2S, it's a wonderful trail.

Thanks Marcy!  I'm running out of FKT routes nearby--I think we need more in the bay area.  Any ideas for some new ones?  You've submitted some great ones.

Thanks Patrick!  I've been trying to figure out how to get Mt Um into an FKT, but haven't put enough thought into what route might be the most obvious/interesting.  Also various pieces of the Ridge Trail could be fun as smaller versions of the big loop.  Then there's the Bay Trail...