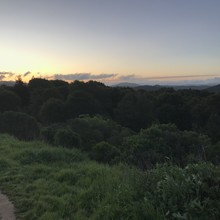 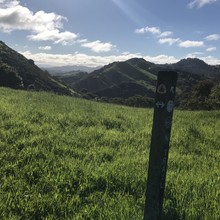 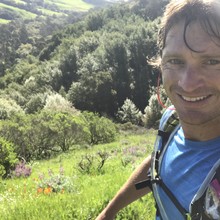 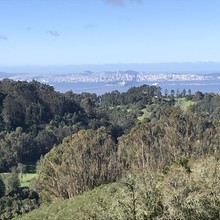 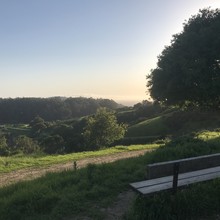 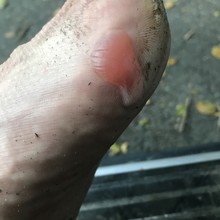 East Bay Ridge Trail TR
This was my second attempt at the East Bay Ridge Trail out and back FKT. I tried and failed the prior week for silly reasons. I probably was not rested enough as I spent the previous days in Yosemite skiing and playing. I should have at least finished with a slow time but my phone was dying, which would make navigation tricky and meant no music, which is crucial for me on these long runs. I also had a crappy headlamp that I struggled with in the morning and knew would be twice as bad when I was tired. So I fixed these problems by resting, getting a portable phone charger and finding my good headlamp.
I started at 5:07 AM and the miles passed quickly in the dark. I saw a small mountain lion and followed a skunk for a good 100 feet, hoping it wouldn’t turn around and spray me. It was another glorious sunrise with the wildflowers on full display. The first half of the run was great and everything felt good. But blisters had started forming around mile 26 and were getting worse. On my previous attempt, I felt like I spent too much time navigating the many puddles that cover the trail. This time, I decided to run right through them. Which meant I had wet shoes and I should have stopped more often to empty the dirt/mud from my shoes. But I didn’t and suffered for it. I also had some thin socks that I had not tried beforehand and I’m not sure why but they did not interact well with my shoes. So by the time I got to the turnaround point, the blisters were pretty painful. I’ve been lucky not getting blisters much in the past but seemed to make up for it all in one run.
I told myself that blisters can’t cause permanent damage (I’m not sure if this is true) and that at some point, it will get so painful, the pain will have to go away; which of course doesn’t make sense but kept me running. I still managed to do 9 min/miles on the paved Nimitz Way but it was the downhill and uneven trails that really got me.
I sat down at the Steam Trains for a good half hour and might have stayed forever if it didn’t get cold and windy. But I hobbled along and counted down the miles till I could take off my shoes and never wear them again. That’s what I told myself at least. I slowed a lot on the French Trail. I didn’t notice on the way but it felt like a lot of elevation change on technical terrain.
My favorite part was to stand where I saw the sunrise and watch it start to set, knowing I had been running the entire time.
I did the first half in 6 hours flat and came back in 7 hours 47 mins for a total time of 13 hours 47 minutes and 12 seconds.
I ate two bagels with avocado, 9 gu’s, 2 cups of dried mango and coconut bites (new at costco and delicious), 1.5 cups of nuts and ½ cup of Craisens. I brought electrolyte drink mix and am a new convert. I felt much better drinking electrolytes the whole way and will bring more next time. My pack weighed 10 lbs to start, including 2.2 liters of water. I have 8 blisters on my feet. This was also the furthest I’ve run by 2 miles.