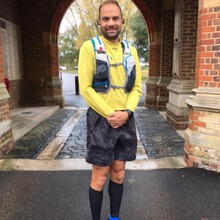 Over the last few months I have struggled with my ‘running mojo’.   With fewer races taking place it has been hard to maintain motivation to go out and train properly.  A combination of starting to run in other places/routes, a recent flurry of activity of others on FKT attempts, and a desire to find more ecologically-friendly challenges, made me look into local FKT possibilities.

I found the Oxford Green Belt Way on the FKT website, and it looked ideal.  It is a decent length for a good run, it goes within 300m of my house, one-quarter of it I was familiar with and best of all (when I first looked) there was no FKT – so all I had to do was to get around it and I would be the fastest person ever!

Over the past two months I sourced maps and recce’d the route ready for an attempt this year, or maybe next Spring.  Looking at my calendar in mid-October I decided that I might as well go for it during my October half-term break from teaching.  The weather had turned, the ground was wet, but I only had to get around it to get the FKT so I might as well have a crack and see what happened.  The night before the attempt I logged onto the FKT website to check if there was anything else I needed to do and it was then that I found two rounds had been logged and ratified since I last checked…. Simon Ross had run 11:34:41 unsupported on 01/10/2020, which had prompted Jason Smith to log his supported time of 8:46:19 from 14/09/2019.  Both of these runners are from Headington Road Runners – one of our local rival clubs.  In addition to this their comments said that the route was nearer 55 miles, rather than the 50 miles stated on the Oxford Green Belt Way website.  This meant two things, I had some times to try to beat and it was going to take longer than I thought.  I logged my intent to attempt the challenge in the comments section, as prescribed by the FKT website, and set my alarm a little earlier.

My alarm went off and I managed to cancel it, rather than ‘snooze’ it, so had a later reveille than planned, this had a bit of a knock-on effect.  The weather forecast seemed to be accurate – 50% chance of showers.  It was cold out, so I deliberated over what to wear to start, opting for a T-shirt and long-sleeved top. I walked to the start with Mel, who wished me good luck, and filmed my departure.

I started at ‘Memorial Arch’ at Radley College, a good place to start as it is recognisable and I thought I could pay my respects to the fallen soldiers by running the route today, and passing through it at the start and end of the run.  The first few miles took me up and over Boars Hill, through Cumnor and round to Farm Moor reservoir.  The conditions underfoot were just as expected – where it could be muddy it was, in the low ground there was sitting water.  The stretch along the Thames was muddy, but not too bad as it was also quite grassy and stony in places.  In the flood-plain areas it was a bit damp and I had to run through a few puddles that were ankle-deep.  Once past the Trout and onto the Canal Path at Wolvercote I filled my water bottles with another 1.5 litres of fluid, with electrolyte/energy powder added.  This stretch was a bit faster with a decent stony path all the way up to Shipton-on-Cherwell (well apart from where I turned right too early at Thrupp and had to retrace my steps).  At this point I realise that I was a bit cold and I put my waterproof on for the first time, of many.  When I eventually did turn off the canal path it got very wet, it was also very open with a cold wind and relatively heavy shower(s).  As I came into the top end of Kidlington the harsh weather eased and I could take my waterproof off, but only for a short while…  Once I got past Water Eaton Manor the mud got worse again, and following the river Cherwell for 2 km was a bit of a balancing act, with a little bit of wading (only ankle deep) where it had eased over its banks.  The next part of the route was undulating, with a mixture of tracks, footpaths and roads, showers and wind.  The route drops down to the Thornhill Park and ride, then up Shotover Hill, and then undulates through more small villages on a mixture of terrain.  The climb out of Horspath was the worst mud.  If it was not sticking to my shoes, it was acting as a lubricant between me and the substrate below, I was very pleased to get out of that field.

When I was coming off of Shotover I had averaged 6.5 miles/hour for the route so far. From my rudimentary mental arithmetic, I worked out that I was going to be close to breaking the supported record, as well as the unsupported one.  Although it was not a direct comparison, it was good motivation to keep pushing.  The muddy climb had dented my average speed, so I pushed on to see if I could make up for lost time.  I knew that the stretch around Nuneham Courtenay would be (relatively) fast, but also that the 6-mile stretch along the Thames would be slow.

Coming down to Culham Science Park there was a stretch where I had overshot in my recce, so did not want to do the same again.  I turned right off of the tarmac path onto (what I thought was) the cut across to the next tarmac path.  It did not ‘feel’ right and when I got to the next tarmac path and was preparing to turn right, I looked to my left to check for signs and saw the one for the OGBW.  I had turned right too early!!  I had probably cut off about 100m and I deliberated what to do. I decided that if I was going to do this route, I would do it correctly, so I doubled back to the point where I left the proper route, turned right, down the correct cut across, and back out to where the sign was, and 40m from where I had been 4 minutes ago.  I started running again, and recalculating my expected finish time.  I felt that I had lost the chance of finishing in under 8 hours 45, this deflation led me to walk a bit, when I should really have been running.

After some contemplation, two handfuls of jelly babies, and realising it would be dark soon, I started jogging again.  The stretch by the south side of the Thames was pretty damp, the water was pretty cold, but only shin-depth at its worst.  As I approached Abingdon weir, I turned back up the opposite side of the Thames, past the really muddy bit (locals will know it) then along the Thames Path.  I managed to keep a decent pace going along there, despite my lack of a head torch.  After the railway bridge the path got really hard to run on as it was rutted, muddy and narrow, but when I reached the cottage, I knew the ground was better from then on.  From my estimates I was still on for finishing within a few minutes of 8:46, I just could not say which side for sure.  Once I got onto tarmac by the Radley boat house and looked at my watch, I knew that I could beat both times.  The run ‘home’ was a familiar one for me and I was greeted by Mel, who filmed me running through the arches for the second time that day.

It was a tough day out.  I finished in a time of 8 hours 34 minutes 43 seconds.  I have listed all my stats from Garmin below.

Would I recommend this route?  Yes, definitely.  It is a nice mixture of terrain, through some lovely countryside.  I can not see any real advantage from starting in different locations, or going anti-clockwise versus clockwise.  I guess any variations will just be down to personal preference and situation.  There are many potential ‘crew points’ or ‘change-over points’ if you wanted to run it supported or as a relay.  I would definitely suggest not doing in during winter, it is much nicer when the ground is drier.  I think that someone will go sub-8 hours on this route soon….

This is what I ate/drank:

Great run Paul!! Sounds like it was a bit of a mud-fest in places - and yes that field coming out of Horspath is always a nightmare! My run in 2019 was bone dry and hot - the only 'mud' was an unwelcome ploughed field in the last mile coming out of Forest Hill...

You'll have noted from the comments under Simon's time that my route was about 1.5 miles shorter with the 'Woodeaton variation' so you were quite comfortably inside my time taking that into account. Glad you dug deep and had jelly babies on hand though :)

All the best, Jason