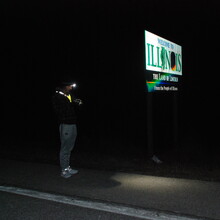 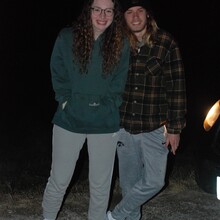 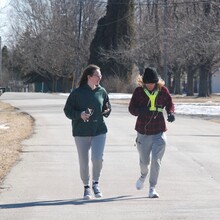 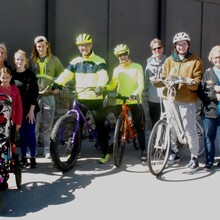 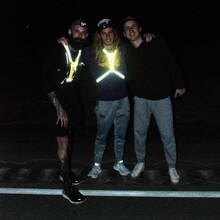 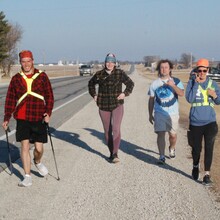 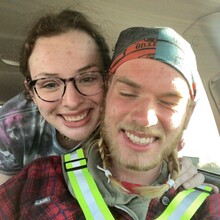 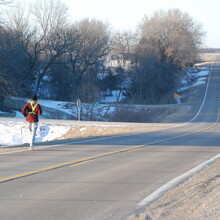 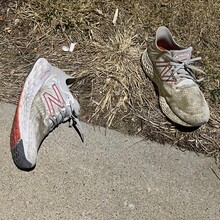 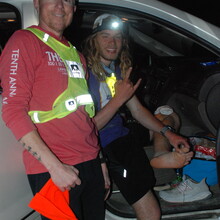 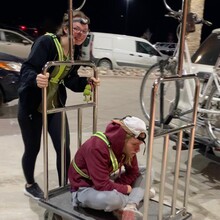 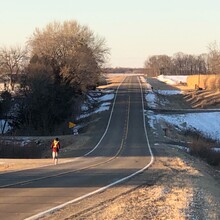 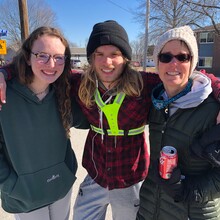 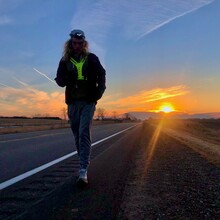 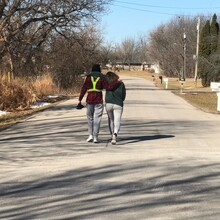 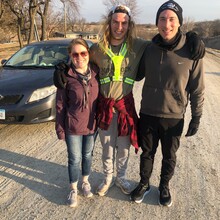 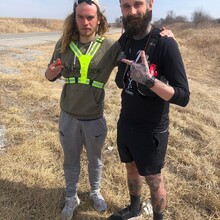 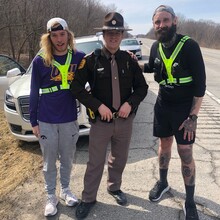 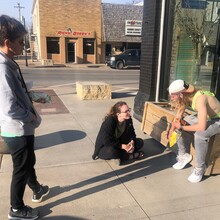 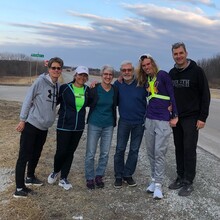 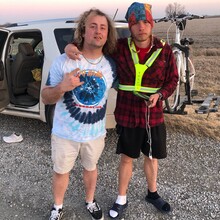 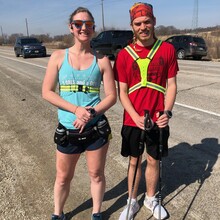 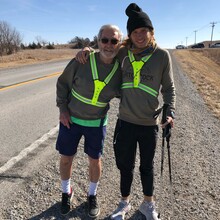 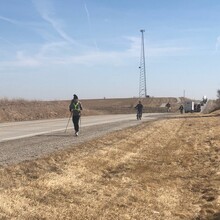 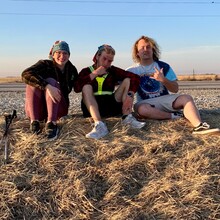 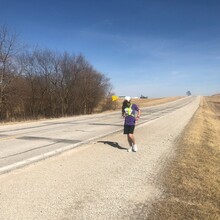 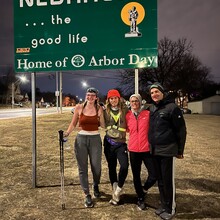 Running across Iowa was a team effort. Without my Crew, Coach Cliff Pittman, my Aunt Nikki, and Taylor Ross, none of this is would have been possible. The main crew throughout the whole race consisted of my girlfriend Sam, and my Mom and Dad. My crew was top notch. My mom was funny and reliable during the trip. My dad was the logistics genius, and my girlfriend was my rock throughout the whole thing. They spent countless hours next to me on the bike, and  they had food ready every 3-4 miles. One of them was biking or running alongside me during various hours of the day and talking me off the ledge when shit seemed to be hitting the fan. I get the credit for running across Iowa, but in reality it wasn’t just me. It was all of us. Without them, I would not have finished.

My Aunt Nikki played a vital role in my success. Not only did she let me train and stay at her house for months when I was training for Hitchcock, she also organized every news outlet to be there. She lined up many pacers for me. Whether it was the Iowa Western cross country team or sending out the story to a news outlet, one thing I've realized is that I am so lucky to have an aunt like my aunt Nikki. She would probably say she only played a small part in me finishing, but that's not true. It was bigger than anyone could ever know.

Day 1: 71.65 Miles: My crew and I started on the Illinois border at 5am across from the Mississippi. Things went pretty smooth. Basically, I ran solo until Washington. Then some friends and family and my girlfriend ran with me through Washington for a bit. My girlfriend drug her bike through the mud for 5 miles (absolute all star). Sam and my parents were top notch all day. We made it to Sigourney night 1. Finishing the day in 16 hours and clocking in 71 miles. We were ahead of pace. We crashed at a motel after a bath and a painful walk to the bed. I fell asleep around 11.

Day 2: 70.32 Miles - I woke up at about 3:45-4 and got ready. I was full of anxiety knowing I had 3 more days of 70 plus miles. Things started out okay until I was almost hit by a car from behind about 5 miles in. A car was passing another car and I was on the white line but was fortunate to jump out of the way in time. I ran until sunrise and started to feel a little better once the sun came out. My mom biked next to me, until the legend himself Reggie came and paced me for 6 miles. I then trekked through Oskaloosa and made it about 34 miles before the previous record holder, Taylor Ross, came and paced me. How cool is that? The current record holder wants me to break his record!??? SO COOL!! Taylor was an absolute game changer. Taylor ran with me for 10 hours until my family and friends helped me finish the day out. Without Taylor my day 2 was garbage ....maybe even disastrous, but with Taylor's guidance and my crew and friends and family hyping me up, I was able to hit 70 miles again. Taylor is an amazing dude, and I encourage you to read his story on crossing the state in 2020. I finished day 2 in 18 and a half hours. We stopped in Ackworth. We marked our spot and then drove to Indianola. I was exhausted. My girlfriend pushed me inside to the hotel on a luggage cart, and my parents got the car organized for day 3.  I went to bed at around 1:00 and woke up at 5 to get around 3 hours of sleep.

Day 3: 70.22 Miles I started a bit before 6 am back in Ackworth. I was happy that I was starting an hour later as I got 1 less hour in the dark. I Made my way into Indianola where shit completely hit the fan. About a mile outside of Indianola, I broke down crying and hung out in the car for about an hour and a half. My girlfriend and parents talked me through it and I started running again. Day 3 was so slow. I couldn't seem to find a rhythm all day, However, I was hyped by Karri at about 15 miles in as she helped me get me going. I made it to Winterset and things started to get warm. My girlfriend rode the bike next to me, while I walked and ran, and we kept trucking. Completely behind pace, I was a bit frustrated. But my friend Jordan had came out to the middle of the country and started playing his drums. I then talked to my running coach on the phone, and was able to relax a bit after that. Things were slow until the night. Something then clicked. Not sure what is was, but I found a rhythm again, I was at mile 40 when things started clicking. I was able to have a really good 12 miles with my family and friends supporting me.  My cousin Nicolas spent 3 hours behind me doing a facebook live which got me pumped. However, at around mile 52, I had already been out there for 17 hours. I wanted to push through the night. I was feeding off the energy of my friends and family. My dad was nice enough to stay awake with me all night driving one mile ahead at a time and making sure I didn't get smoked by a semi at 3am. We pushed through the night and after a phone call with Jeff and Jenny around 3am, I was able to make it to mile 70 a little past 5am making it a 23 hour day. Exhausted, I fell asleep in the car.

Day 4: 67.66 Miles I Woke up a bit after 7. I felt like I got hit by bus, and then the bus stuck it in reverse and and ran my ass over again. However, I was able to get close to 90 minutes of sleep. I was able to get some food in me thanks to Sam and my Mom picking me up some McDonalds. My body was extremely tight, but spirits were good. Today was the last day and I was determined to finish.  I started out running at around 8am feeling strong. However, as the heat started to hit me, I felt exhausted and tired. But the support was there! My 84 year old grandpa started RUNNING with me. My grandpa came out and we walked for a bit, Grandpa then asked "are we gonna start running??".He's 84 years old, and wants to run!. Talk about a true inspiration.  More grandparents showed up and numerous aunts and uncles showed up with strong spirits and signs to pull me through. It was around Griswold, when I started to get pissed. It was so hot outside and the wind had picked up. Griswold was my least favorite town of the whole state. Fortunately, thanks to my girlfriend and parents I was able to survive that stretch and continue forward.  After Griswold, I was picked up by another pacer Amy and she worked on getting my pace picked up. While it started out slow, I was eventually able to find some rhythm. The Iowa Western cross country team then came out and ran a few miles with me and friends and family were all over. Into the night we went and my brother James then ran 15 miles with me in his Vans.  My great friends Jeff Morrick and Don Thoms were great pacers and helped me get through the night. With 17 miles to go, I lost my shit once again. Coming up on a massive hill in the cold, I was freezing and tired. I started yelling a few f-bombs such as "fuck this shit" and "this shits never gonna end". However, I got to the car warmed up  where I watched a inspirational video from my friend John Halter. His theme was "be an eagle" and I was able to turn it around. I got out of the cold and my cousin Matthew joined and helped switch up the dynamic.  We made it into Council Bluffs. In Council Bluffs, there was a a rally of family members who got me pumped. I finished at 3:50am. 94 hours 49 minutes.

Going into this FKT attempt, I just wanted the record. But I gained so much more--new friendships, love and support from family, and one hell of a journey. The record is cool and all, but it doesn't compare to the journey and memories and friendships I created along the way.