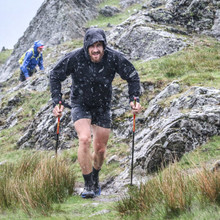 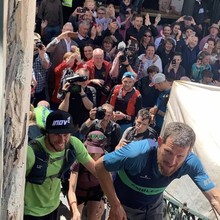 Report on the inov-8 blog (which also has some updates along the way, as well as photos):

The inov-8 ambassador set a new fastest time for summiting all 214 of Alfred Wainwright’s Lake District peaks in one go. He did so in a 6 days, 6 hours & 5mins, breaking Steve Birkinshaw’s five-year-old record by almost 7 hours.

Paul ran and fast-hiked approximately 318 miles and scaled the equivalent ascent of four times Mt Everest. Supported on and off the fells by friends and family throughout, he battled exhaustion, sleep deprivation and all manner of weather conditions to take his place in this history books.

Paul finished in the club vest of his good friend Chris Stirling, who passed away recently. He was greeted on the finish steps by family, friends and Joss Naylor, who was the first man to run the Wainwrights in one continuous circuit in 1987.

Paul has been wearing our X-TALON 260 ULTRA for all soft ground and switching into TERRAULTRA G 260 shoes for extended hard-packed trail sections. Both are wider-fitting shoes, perfect for longer distances when comfort is crucial.

Watch a video of Paul finishing his Wainwrights record run here, and another video of him topping out on summit number 185 (Dodd) here.

Paul said: “The hardest bit was definitely the lack of sleep.  The best bit was finishing! Seeing so many people in street cheering me on, then being up on the finish steps with family and friends, having beaten the record, that was more than I could have hoped for.

“There were lows… times when I thought I’m not sure if I can do this anymore, but I just kept pushing on. That awful Sunday night in the storm up on the fells around Fairfield, that is something I won’t forget. I’m looking forward to a rest now, but not before drinking some beer!”