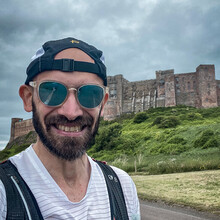 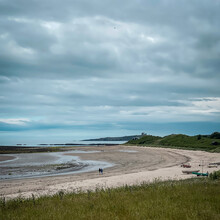 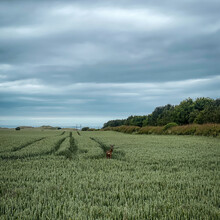 Wanted to do a long effort for the solstice and have had my eye on a few local trails for a while. I'm normally a mountain runner so endurance over flat terrain is new territory for me. Left car at Cresswell and got the train to Berwick to run North - South, this was purely a logistical decision based on where I could get transport to morning of. Weather was pretty muggy and I upheld tradition by starting off a wee bit too quick!

There's a tap in Fenwick which made me think I could go unsupported rather than self-supported but it was a long slog from there to Bamburgh (I'd advise if you're self supporting to consider buying water at Belford co-op) too. Ran out of water on way down to Bamburgh and then couldn't take carbs on and just had a really dark hour where I thought I might not do it all. Once I got to Bamburgh I topped up on water and had some ice cream and Fanta and a ten minute break.

After that I was much better with fuelling and never had any more dark moments for the rest of the route. Sign posting isn't brilliant, and sometimes the older 'Northumberland Coastal Trail' and the new 'England's Coastal Trail' signposts seem to have minor variances. After Bamburgh it pretty much clings the coast and it was good to get the psychological boost of some prominent landmarks to pass on the way through.

Decided to stop for a short break in Craster and Amble, as the earlier incident had spooked me and I just wanted to focus on a sustainable finish. The last stretch into Cresswell is on the beach which produced a groan but the tide had not long turned so there was decent sand to run on.

From a fuelling perspective it gets tricky after 5pm as things start to close, but Amble has a late night Tesco which was a lifesaver. I enjoyed doing something a bit different, first ultra distance on flat ground, but look forward to getting back to the hills!