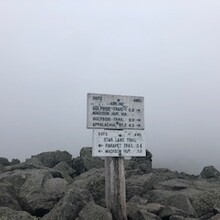 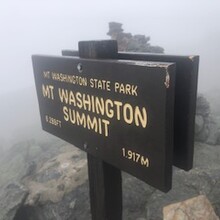 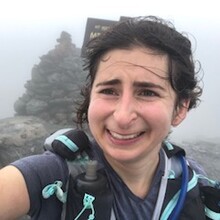 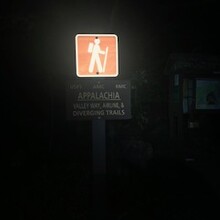 I planned to do this route last weekend but was called out on a SAR so I had to make due with less than ideal conditions from high winds and low visibility. I started at 8:25. I have done kings ravine many times but this was my first time accessing it from short line. I felt great for this first climb but as soon as I got above treeline it got really windy which affected my ability to hydrate and fuel. I headed down star lake trail where I ran into someone from my AIARE class from last winter. I then headed down butress trail where I banged my knee, head and rolled my ankle a couple times. After I headed up to the great gulf headwall and it went great at first until the second half of the headwall when I ran into lots of cloud cover which made route finding on a trail with not obvious markings nearly impossible even with a GPS track. I ended up topping out one chute to the left and having to make my way to the correct route. Heading down Tux and then up Boot Spur Link was where I started to feel the effects of not being able to fuel properly. Once down at Pinkham I refilled water from the Spigot, said hi to my friends (I live and work at Pinkham) had a lot of my food and water and headed up Huntington. Going up I found I had dug myself into too deep of a hole and was low on energy but did get to see a really pretty sunset. This trail is on the terrifying 25 list and it was always fun and easy for me but today it was a little terrifying due to low energy and as a result took super long. Once up to Alpine Garden it got super windy again and I almost got knocked over a couple times. Near the auto road I pulled out my headlamp and headed down Wamsutta. I had to fix my headlamp partway down and with the darkness and fatigue the descent took longer than normal. I headed down great gulf trail to Mad Gulf and Great Gulf seemed to stretch on forever. Up Madison Gulf I just kept putting one foot in front of the other and it went ok but I did run into some illegal campers. Once I topped out the wind was the worst it had been all day and thats saying something on a day like today. The visibility was also so bad I could not see the next cairn and my energy had now reached empty. The winds, low energy and having to check my watch constantly to stay on route meant I barely was making forward progress until treeline. I did my best to run down once below treeline but its hard with low energy. A fun day nonetheless but hope to try again sometime and greatly improve my time in good conditions.