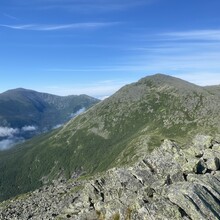 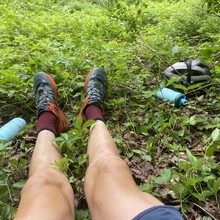 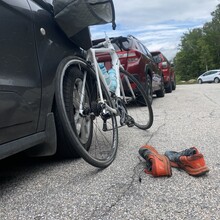 Today, July 16, I completed the Presidential Picnic traverse in 6 hours 1 minute and 43 seconds alone, which includes both the 19 mile run and the 27 mile bike ride. I started the run from Appalachia trail head and worked south towards the AMC Highland Center. This was a big effort, but super fun to see how much distance one can cover by foot and bicycle.

I started the run around 7:15 AM from Appalachia trailhead and had no issues with navigating the route (this was my first attempt at the full Presidential Traverse) until the ascent up Washington (I didn't realize the suggested route follows the Cog Railway so closely) and was forced to backtrack on the Westside trail back to the Cog and then up to the summit. I don't think this added too much time in hindsight. I then also made the mistake of staying on the Crawford Path and bypassing the Eisenhower summit, however, once I realized that, I took a right on the Mount Eisenhower Loop trail and completed and the "out and back" to the summit. Overall, the trail was quite slippery on the rock below tree line as we have received some rain in the last few days, however, the rock above tree line was dry. I am super impressed with the other fast times on this traverse! I was surprised to see that Lakes In The Clouds was open during Covid-19, but gratefully filled up water on the outside spigot.

I stashed my bike in the woods off of the Crawford Connector path and changed in chamois shorts before quickly departing. Overall, I tried to keep a consistent cadence to complete the bike segment with a steady time. I was very fortunate to have a tailwind at the start, but did suffer through a headwind once I turned onto Route 2.