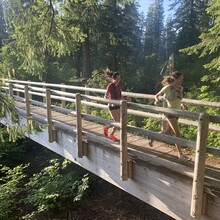 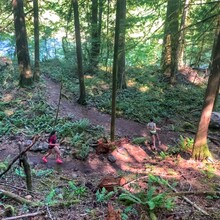 Super day on the MRT! We started from the northern terminus of the trail around 7 AM, hoping to run a steady effort all day. I recently figured out how to use the navigation tool on my watch and this came in handy for reassuring us that we were on the right track, I highly recommend this if nothing else for bolstering confidence that you're going the right way. This meant less emphasis on our pace so we hadn't been paying attention to this much until the final half of the effort. Fueled mostly by Sweet Tarts Ropes, Spring Energy gels and the hope that our Okay Crawdad T-shirts would soon be coming in the mail, we felt energized and the most focused we'd been since our last hard efforts at the end of February. As the day heated up we became more nauseous, our fueling dropped off substantially. Lots of little chipmunks along the way and Jessie even saw a tiny snake! Some things to remember for next time: stopping at the falls and blue pool to take in its majesty is a must (at the time it felt indulgent, but we regretted this later), starting earlier might be a good idea to avoid the heat later in the day, and having a strong core for this route is a good idea with all the twists and turns. Would love to see some more speedy ladies send it!

Photos by Tyler Green who shuttled the car and was out mountain biking.