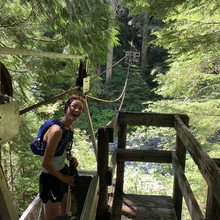 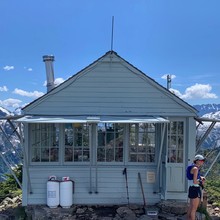 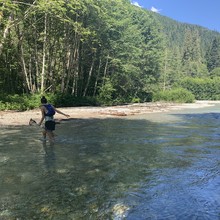 Tyler and I were seeking out a North Cascades weekend adventure and found the glorious Copper Ridge Loop posted here on the FKT website! Tyler is training for Cascade Crest, and I'm training for CCC so we figured this would fit both of those courses nicely. My friend Susie backpacked it with her dad in the fall and spoke very highly of the route as well. We drove up to the Hannegan Trailhead on Friday night, slept in the car the night before and got started at 8:26 AM. We saw a bunch of hikers, trail runners and a group of guys with ice axes, who were headed up Ruth mountain. We wanted to move efficiently but still take in the views and really relish in the cable car glory. We decided to do the loop anticlockwise so we'd have the ridge running and views as a reward. The first 10 miles went very smoothly but as we descended into the valley we were met with lots of sharp pokey foliage overgrowing the trail, which slowed us a bit until the Chilliwack River Crossing (yes, it was chilly). From here we began climbing and stopped at a tributary stream to fill our bladders. We had Justin Snair's 9h 6m record in mind, and were hoping to break that. As we were looking at Strava segments after the effort we realized that Greg Talpey had run 7:32:03 ( https://www.strava.com/activities/1865960329/overview ). We pushed the climb at bit and weren't together consistently on that but grouped up at the top and continued on the ridge together. We took a few photos up at the Copper Mountain Lookout tower and realized that if we pushed a bit we could break 8 hours. I was bummed when my watch died with 3 miles to go, thinking well shucks, I guess it doesn't count. We ran into those Ruth Mountaineers on the descent as well, and they'd succeeded in summiting, which was fun to hear!

I'm providing my GPS data as well as Tyler's here. All in all felt pretty good, I'd love to see what some of the many other speedy ladies could do on this route!

Amazing job! I hadnt realized that Greg did it much faster than what I claimed was the FKT at the time. You all smashed it. I will need to try again. Less berry picking this time and no lunch break!

Oh wait! Greg did it 10 days after me. Guess I sparked a FKT battle royal. The route is amazing and I hope people keep pushing the record.