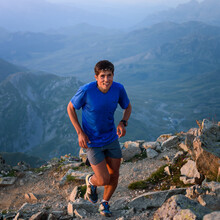 The Midi d'Ossau is one of the most iconic and beautiful mountains in the Pyrenees, without a doubt, and that despite not exceeding that symbolic figure of 3,000. The Midi "only" stands 2,885 m, but its haughtiness, its figure, its majesty dominating the entire d'Ossau valley makes it unique, standing out from countless points. It is in France, but we can consider it ours. He presides over thousands and thousands of photos, taken from infinity of points. It is MIDI and we have it just 5 minutes from the Portalet border.
What better peak to make a record. An FKT of which we still had no reference. Until yesterday, when the Canfranc rider and for some time from Adidas Terrex, Raúl Criado, set a time to go up and down from 1: 53.13, which is already FKT of the Midi d'Ossau.