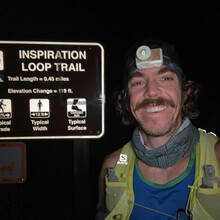 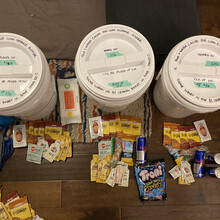 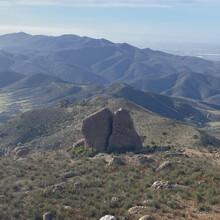 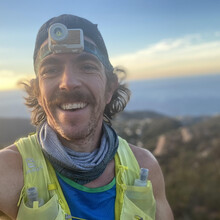 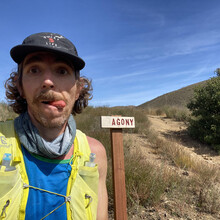 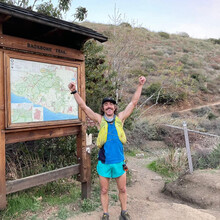 This was a very special run. I had made an attempt (not for FKT) with friends back in November and had to bow out after Encinal Cyn for stomach issues. To finish yesterday and nab the self-supported FKT was very sweet redemption.

I started my run just after 3:30 a.m. on Sunday, Feb. 14 — happy Valentine's Day to you my sweet (and sometimes cruel) endurance running — from Will Rogers State Historic Park. Ran the Backbone Trail from east to west.

The winds were very intense for the first three or so hours in the dark, swirling and gusting. I would estimate gusts reached 30-40mph. I was thankful it wasn't a straight headwind, though it was at times.

The sun started to rise on my way up through Hondo Canyon toward Topanga Tower Motorway. Attacked that climb probably a little aggressively for what was still ahead of me, but was feeling really good and wanted to try and give myself a little cushion. Arrived at my first cache at the Piuma trailhead. The people using the bathroom must've wondered what was up with the sounds of the guy refilling his softflasks and taking in calories behind the outhouse where I hid my bucket.

I made decent time up the Mesa Peak Trail, but still hiked plenty. Then on through one of my favorite sections of the BBT, Corral Canyon to Kanan Dume to Encinal Canyon. So much runnable pretty terrain. My stomach went far south at mile 31, along that stretch. At mile 38, I came upon my second cache at the Kanan Dume trailhead, where I diverted away from gels and waffles to entirely fuel of Tailwind, Redbull, and sour, salty gummy worms for the remainder of the run.

From Encinal Canyon up to Mishe Mokwe, I really struggled. That section is usually a very runnable climb, but I struggled to run all but a little from miles 41 on. I came upon my 3rd and final cash hidden at mile 50, just before the ascent to Sandstone Peak. That cache fueled me up and over the peak to the Boney Mountain descent. I was counting on that descent to stay on pace to set the FKT. I ran it fairly well, but it is such a steep and hurt a lot. My quads were destroyed by the time I reached Danielson Ranch, but at that point I could pretty much smell the finish, with only one more reasonable climb left before bombing down the Ray Miller Trail to the finish. One of the great highlights of the day was seeing a young bobcat just off the Big Sycamore Canyon Trail leaving Danielson Ranch. It paid me no attention and was pouncing and seemingly hunting something, or practicing at hunting. Beautiful creature!

I was hurting so good by the time I got to Ray Miller Trail, but you can start to hear the sound of the Pacific on the way down, and that is the final kick to bring me home. I finished with the sun setting over the Pacific. Just stunning. So proud of this big effort on a beautiful and historic stretch of mountain trail perched over the ocean.

Lastly, I'm so humbled to be able to do this kind of running and to join this group of other amazing athletes who complete this entire trail. My hat is off to all of you!