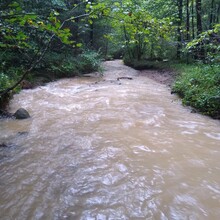 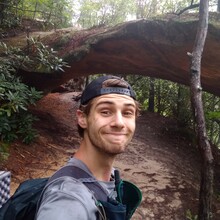 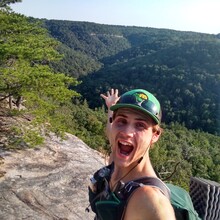 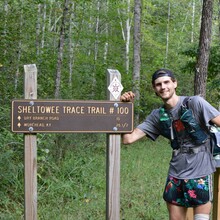 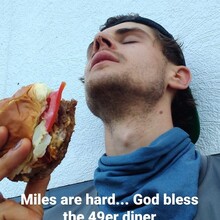 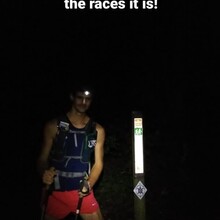 9/7 Day 1: Started from the southern terminus at 4:00am and made it 46mi to the TN/KY state line. I got a little confused on the section just north of Charit Creek Lodge were the trail follows another bigger trail for parts and parallels for some. Regardless I did some extra miles going back to clean up the spots I missed.

9/8 Day 2: The day started out with some more technical trail crossing the same stream at least a dozen times. I definitely had to work harder for the miles today and only ended up with 38mi on the day.

9/9 Day 3: I would call this the lakes and rivers day as I followed river, creek or lake shore pretty much the whole day. The trail passes right trough Cumberland falls State Park and luckily the cafe was open and I was able to make a quick cheeseburger and fry break. I'm pretty sure I scared a few people vacationing as came up with an exhausted look and blood on my face and shorts from a nose bleed that had been palguing me most of the day. I decided to try the dirt nap method out and stopped around 10pm for little over and hour. I pushed on around lake Laurel which is some easy hiking and very beautiful along the shoreline and the moonlight on the water. I missed a turn and ended doing about 1mi extra to get back and clean up the little section I missed. I stopped for a dirt nap again around 4am for ~2h. Roughly 48mi for the day.

9/10 Day 4: Once the sun was up it was a beautiful morning passing through more rock features and waterfalls. I made to the 49er diner (where the trail crosses I75) around 6pm. The truck stop/diner is a blessing as they have a motivationally inspirational double bacon cheeseburger which I was in dire need of as the last several miles had been a struggle. A packed out some Ale-8 another blessing of Kentucky (a KY local ginger ale) and made it a few miles past the half way point about 38mi for the day.

9/11 Day 5: Around 11am I picked up my resupply which I had stashed in the woods around S-Tree Campground. From here the trail follows ORV trails for a while creating many choose your own adventure sections around mud pits and the such. Once you leave the ORV trails it is a another beautiful section of trail for a few miles the only bad part is the spider webs are ridiculously frustrating. I made about 42mi.

9/12 Day 6: I went through the infamous road walk sections today. There on about 15mi long and one a few mile later about 5mi long. It fun getting to walk through/experience rural KY from this perspective but you do have to watch out from the dogs. Most of them are relatively friendly but there were at least 3 that I had to fend of with my trecking poles. Midway trough the second road walk the heavens decided to open and I was getting thoroughly soaked. Luckily I came across a new ORV park that let me hide from the rain in their garage and reorganize my gear for a while. After getting reset I headed towards Natural Bridge St Park as it started to rain again. The trail isn't marked well through Natural Bridge or maybe my mind was just foggy or it was pouring buckets, or a combination of the three but regardless I missed a turn and had to redo the section from the Lodge up to the Natural Bridge. A frustrating  mistake  to make at 11pm in the rain but on the bright side I was able to hide in the bathroom at the lodge and use the hand dryer to attempt to dry things out some. Moving on the rain started to let up some and I made a few more miles stopping at a trail head off Tunnel Ridge Rd for around 2am for a cold soaked noodles and a dirt nap. I had to redo another small section ~0.4mi where the trail parallels Tunnel Ridge Rd. (I thought it followed the road but was mistaken).

9/13 Day 7: A rough morning going through the Red River Gorge area and beyond. I realized that the area was prone to flash flooding and with all the recent rain many miles of trail varied from 1"-18" of standing water to points where the trail had full on rapids. One spot (pic included) after the road walk north of Red River Gorge it was bad enough I felt unsafe and had to furnish my own high water route. On the road walk north of the Red River Gorge I stopped at church that had a pavilion to hide from the persistent rain reorganize things a minute. The Pastor came out and gave me some water which I kindly thanked him for but also was thinking water is the one thing I have too much of right now. Moving on the rain finally let up for good but the trails were still soaked and my foot was starting to fall apart from being water logged for so long. The section around Cave Run lake was probably the worst part of the whole trail. It follows a horse trail but is literally 5 miles of mud pit. I lost a tecking pole tip, almost lost my shoes, leg, and definitely lost part of my sanity but made about 42miles on the day.

9/14 Day 7+: After a quick break on the Cave Run Lake Dam I continued on through the night. Eventually when I got to the road leading into Morehead I stopped for a 5min nap because I was literally falling asleep while walking like a drunk down the road. I probably made it another mile before I had to stop again this time for a 10min nap. After this break the sun was coming up and with a coffee and energy drink from a gas station in Morehead I was able to more or less hold it together the  remaining 27mi. The last 14 miles were seemingly endless but I eventually made it to the northern terminus at 6:10pm and was greeted by some of my family.

I was reviewing the Sheltowee re-route through Clearfield realize that I took the old route staying on North Mill Branch Rd. to McBrayer Rd. instead of taking Hogg St. past Howard CT. onto Clearfield Hill Rd. to get to McBrayer Rd. Distance wise these routes are about the same distance the new route is roughly 700ft shorter. I just want to keep it transparent about any wrong turns I took. Navigation can often be confusing on Sheltowee at times but that keeps it interesting!