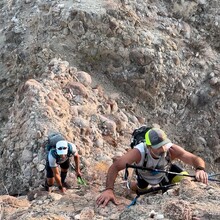 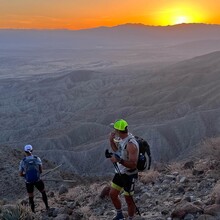 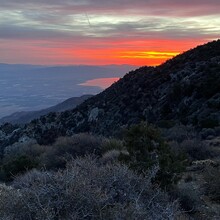 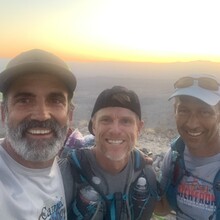 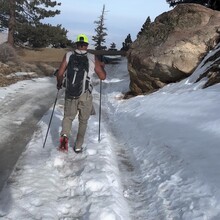 This crossing of the SRT for the FKT was my third attempt. The first two (done in self-supported style) I failed to finish because of (first time) a poor water placement causing me to go without water for hours and thereby food which led to a major bonk hurting my time and (the second) poor nutrition selection causing me not only to lose the 51 minute lead I built but the need to call it quits being unable to put down calories. Both exit points just 8 miles from the finish. I knew I could get this thing done but I didn’t always have time to make the water drops, so I decided to attempt it unsupported which meant balancing between weight and water. I knew I could go without a ton of water, but not enough would hurt my body’s ability to perform well. I had two plans. One, go after the overall time (which was originally an OKT as there were no known records of anyone crossing all 9 peaks of the Santa Rosas in a single trip) set by Robert and Brett, but if that wasn’t in the cards, then just finish and set an Unsupported record.

While in the planning stages, I talked to a couple of friends from Utah, Bup and Zane, about coming along for the ride. They’re both a little older than me but absolute athletic maniacs! So, for the first time, I wouldn’t be soloing this crossing, which I was totally ok with. They flew down and we started at the prescribed point on the S-22 outside of Borrego Springs, CA just before 6pm.

We were able to get the most “technical” peak, Travelers (Palm) Peak, done before dark in 1:04 (10 minutes ahead of “race pace” set by Robert and Brett) and prepared for the long night ahead. I was feeling the extra weight compared to my other trips but felt good as we topped out on Pyramid Peak (#2) in 2:44 (4 minutes ahead of race pace”) and knowing the long slog up to Rosa Pt (#3) was around the corner. This is where the extra weight was catching up with me. Bup and Zane are more fit than I am due to all their years of training and competing in the Ironman and ultras so they gave me breaks on leading at times which was helpful because I’m half-focused in the front route-finding through loose terrain. I could thankfully point out which way to head up the ridge in the dark. We made a great team! I started to feel a hint of cramping which I was nervous about with only drinking 7 ounces an hour and an 80-degree start. Nothing a shot of pickle juice couldn’t handle! We seemed to hold a steady pace to Rosa Pt summiting in 4:10 (5 minutes ahead of race pace) as well and even gaining speed getting to Mile High peak (#4) at 5:14 (11 minutes ahead of race pace). We descended 1,000ft, crossed the saddle and as we were climbing back up to engage the ridge again to Villager Peak (#5), Bup broke one of his poles. This is not a trip you want to do without poles! He started going to work on figuring out if it was repairable. He did the best he could with some medical tape that surprisingly survived the remainder of the trip, and we headed off to Villager. We arrived at the peak in 6:56 (6 minutes behind race pace) due to the repair needed, which was fine, because we knew we were back in business and could catch up. Our pace was good but the darkness (about 3am at this point) was giving us a taste of the frustrations soon to come. I had not done this upper section around Rabbit Peak (#6) the following ridge to Dawn’s Peak (#7) in the dark before. The brush becomes more and more dense up there as well as taller, so although we made good time to the vicinity of Rabbit Peak, finding the true peak (a boulder outcropping with a register box) proved to be very difficult. We made it to the peak in 9:18 (7 minutes behind race pace). I still felt good about our chances of regaining the lead but was also beginning to wonder if I needed to accept the idea that a separate Unsupported record was enough. Since I had a tough time making that decision internally (Bup and Zane were fine either way because they were just wanting to have an adventure with me…and we did!), the continuing darkness waiting for us across the ensuing ridgeline toward Dawn’s Peak made it ultra clear, “Just finish!” I knew that upper section between Rabbit to Toro Peak (#8) was extremely difficult from past experience. There’s a reason there’s only been a few people that have ever made the crossing. But I was foolish enough to think I could keep the pace if I just followed my previous GPS line through the brush and boulders (sounds possible??). Yeah sure, you try meandering through that minefield of slippery slopes, overgrown drops and bloody thirsty plants while staring at your phone trying to read your line as your little orange arrow constantly refreshes itself (“You’re here. No, you’re over there. Actually…Where are you?”) Hours of this made the point, “Yeah, let’s just finish in one piece.” Poor Bup and Zane had no idea this trip was going to be this demanding but they were learning extremely fast and with a pretty good attitude I would say, although I think I was the only one still making jokes.

We managed to make it to Dawn’s Peak in 14:34 (an hour and twenty three minutes behind…ahh who cares at this point) and decided we could slow the pace just a bit since we weren’t chasing anything now although we still wanted to set a good challenge in case someone else is as dumb as us. At least once or twice every thirty minutes, one of us would yell, “Ouch! Hold on.” I have no idea how much cactus we picked up but I think Bup ended up with the worst of it. He was a bloody mess. As we headed to the ridgeline’s lowest point, looking up towards Toro’s snowy tower, I encouraged the guys to settle in, this wasn’t going to be fun…at all. Long story short, it wasn’t fun. Slogging, ouch, slogging, ouch, repeat. I was actually happy to see the overgrown Manzanita mess around Alta Seca Bench because it meant a break from the steep sandy climb for a little while. We ate handfuls of snow as patches were revealing themselves under bushes and soon we were trekking in about 8 inches of snow as our needled shoes were now soaked and cold. We had the mountain to ourselves because the gate at the bottom of the forestry road was closed due to road conditions, which was fine for us but a reminder that we were on our own to finish. No rescue truck with pizza this time. We summited Toro Peak (#8) in 22:27, took in the beautiful view and overlooked the journey behind us as well as what laid ahead, and began the slow jog over to the last peak, Santa Rosa (#9), through snow, ice and mud. We summited the final peak in 23:33 and decided to stick with my preapproved (by Robert and Brett) plan to finish the final miles from Santa Rosa to HWY74 though a cross country route that would lead us directly to the community of Ribbonwood (about half the mileage that Robert and Brett originally established down the remaining forestry road to HWY 74. It definitely would’ve saved us some time IF the upper 2500ft weren’t covered in corny snow! That was…interesting. Tired legs sliding down steep ledges that have hidden logs and large stone slabs that surprise you when you step through the icy crystals and whoops! Whoops again! Whoops some more! The guys were so amazing and strong but they started wondering if I had planned this on purpose just to test them. Some sort of sick joke! I was hoping to slow jog the remaining 2 miles as we made it back to terra firma, but we all settled with a quick walk instead. We made it to HWY 74 for the finish at 26:09:32 (although I forgot to actually stop the tracking, duh, until 26:12:39, oh well, I guess that’ll be the official). We would’ve been better off running the road (lol). The route down would’ve worked perfect if it weren’t for the snow. Oh well, we were just happy to get it completed! We had to hurry and get down the mountain and shower up because we had a birthday party to go to! Who needs sleep when there’s cheesecake?!