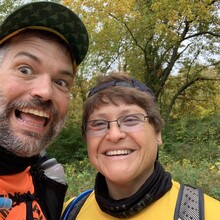 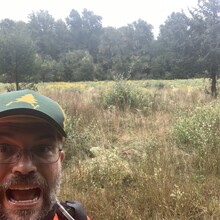 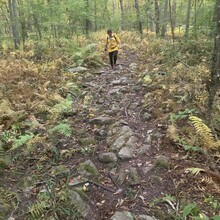 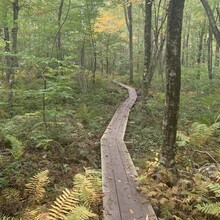 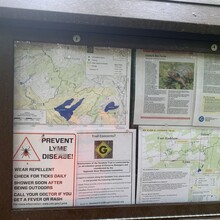 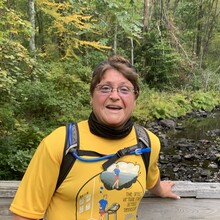 We ran the Richard Goodwin Trail End To End to End.

This is a 13.3ish mile trail. We started in on the West End and did an out and back to the East.  The trail starts out with mostly single track and then goes over some old forest dirt roads and returns to single track.  The trail starts in one nature preserve and goes through a series of other parks, game lands and private property.

Our original plan was to run the trail supported with a vehicle dropped off along the way. Unfortunately, the car broke down the morning of the run so we changed to unsupported format.

We ran this as an unsupported mix gender team.  We had been looking to run a marathon for our virtual Marine Corp Marathon and wanted to try something new.  I had been eyeing run this trail as an out-and-back since last year, had run all the sections and actually had made an earlier unsuccessful attempt with my daughter-in-law.

The area is undergoing a drought. So the sections of the trail that are normally muddy or sometimes under-water were high and dry.  We knew this and knew that there were no water sources or resupply available.  So we carried extra water.  The day ended up being hotter and more humid than last week or so. We ended up with enough water to finish, but a little more would have made life happier.

We had planned on doing a mix of hiking up the hills and running down the other side.  About half-way in, Maria's knee began hurting bad.  So we hiked the entire trail back to the start.

Sometimes not seeing something is a blessing as I (Robert) apparently jumped over several nests (as witnessed by Maria) before pausing to allow a larger (1 foot or so) snake to cross the trail.

The route contains sections that are just awesome.  Maria and I had a great adventure and look forward to seeing zippier folks passing us by!