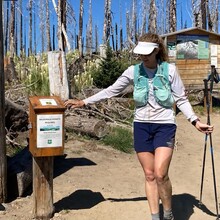 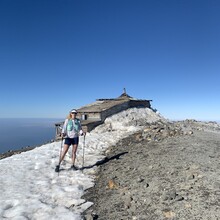 Beautiful day for a climb. So much snow has melted since I was up on the mountain a week ago. It was all scree/dirt climbing until the top end of the Crescent Glacier, which felt real slow. Snow conditions were great and firm for the ascent, but there is a large scree section opening up on the top pitch of false summit. And of course the summit pitch is almost all scree as well.

Summited in 3:03, and had to haul ass on the way down to nab the RT record. Couldn't really go fast down the false summit though, as the snow hadn't softened up much yet, and I am not a graceful or confident foot glissader. So that took me longer than I would've liked, and an area I'm going to work on! It was a pain cave sorta day, which was probably more valuable for me than if I had been feeling great. It was super fun having my fiance and brother up with me for this.