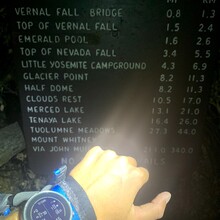 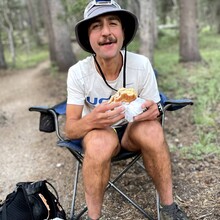 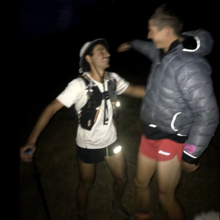 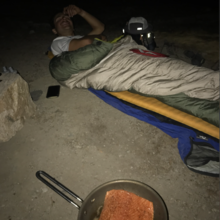 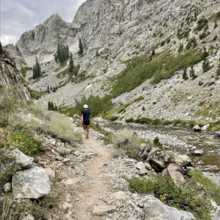 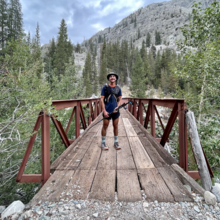 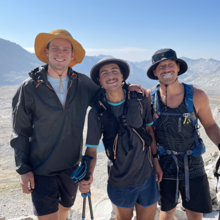 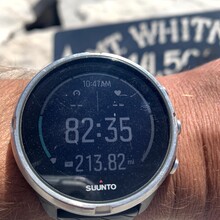 Living in Mammoth allows for an easy commute to the trailhead. I picked up my permits from Tuolumne before driving down to the Valley for a quick burger from the Yosemite Lodge Grill for dinner with my Dad. We "slept" in the baking hot car in the lodge parking lot before getting up to drive the 20 minutes to the Happy Isles trailhead. To our surprise, the road to the Happy Isles trailhead, or start of the JMT, was closed so we parked in the lot about a 10 minute walk away. By the time Dad and I got to the start it was 12:12am. Without thinking about it I hit start on my watch and rolled straight into the effort passing the JMT Trailhead sign at 12:15am on Thursday August 12.

My gear on me at all times was simple. A custom fastpacking/running pack made by Deckers Labs, Black Diamond Carbon Distance poles, food to get me through the aidless stretchs, 2 17oz Salomon filter soft flaks, a few lightweight layers, an emergency bivy, and my tracking devices. The plan was to meet crew out at 3 crucial places for big refuels and longer calculated naps. Day 1 was about getting to the Duck Pass Junction (mile 70), Day 2 to Bishop Pass Junction (mile 137), Day 3 to Kearsarge Pass Junction (mile 181). These were mostly chosen by how accessible they are for crew to backpack in a lot of gear for me to sleep.

I sent Yosemite through the night and averaged right over 16 minute miles to my first support station at the Tuolumne Meadows Campground around 23 mile in. There, I was greeted by Sean with a camp chair, coffee, and breakfast sandwich. After running all over the campground to find me, Dad showed up and repacked my bag with food and drinks. I left Tuolumne toward Donohue Pass after about 30 minutes of rest and had Sean hike a couple miles out that way with me.

The next stretch toward Donohue was pancake flat and allowed for some 12-14 minute miles of shuffling the feet. Dropping down Donohue towards Thousand Island Lake felt special, as I was nearing my home town trails that I can run on any given weekday. It felt familiar and comfortable. A lot of lows through this point already though. The heat really picked up and I also realized that by starting at midnight and not being able to comfortable fall asleep in the Valley I had rolled into this massive effort on effectively a full day of no sleep. Luckily found one of my pacers Dani at mile 54 and she brought me through a speedy 5 miles down to Red's Meadow where I was greeted by my Dad and Sean again, and a surprise Pete with his children. Only 11 miles to my first sleep station near the Duck Lake Junction at this point. I was up and running again after about 30 minutes, got up to Red Cones in a little under an hour and found Bently, who paced my the last 8 miles through the smoky sunset to my sleeping pad, bag, and fresh cooked salmon and rice at the Duck Junction at 8:45pm.

I slept 2.5 hours here after Chef Mike cooked me a stupendous fish dinner. Mike and Mark struggled to wake up and get me moving but finally I was able to hobble out of there at 12:45am on Friday. Mark paced me 11 of the miles to the top of Silver Pass in which we also picked up Claire, who was serendipitously camping out at Purple Lake at the same time, for a couple of night miles.

Once Mark left I probably hit my lowest point on the whole trek. The sun had not come up yet, I was cold at 10500ft at 4am and severely sleep deprived. I pulled out my emergency bivy to nap for an unknown amount of time. The sky began to light up and I pushed on. I did this one more time about 10 miles later and then finally got my legs moving for the day. I hit Piute Canyon junction at 2:30pm where I met my wonderful girlfriend Nikki who backpacked out there to meet me (one of the most remote sections of trail!). We hung out, ate, and napped and I did my first shoe swap of the journey. She chose to join me for about 4 miles and we were out of there 4:00pm. I had a 25 mile stretch to Bishop Pass Junction where I would meet Tim and Josh and get my second "full" rest in. I got there at 11:30pm making it a 23 hour day out on the trail. 137 miles done.

The alarm went off at 3:15pm. My legs and feet were throbbing. I stuffed my face with backpacking food and coffee and Josh, Tim and I charged on to Mather Pass at 4:30am. This would prove to be the hardest day as I had 3 very steep passes shoved into just 43 miles- Mather, Pinchot, and Glen. Luckily I had Josh the ENTIRE day who kept the pace and moral high. Aside from a very hot, demoralizing, long, steep descent off of Pinchot that broke Josh and me up to the Rae Lakes, we had an incredible day. Easily my favorite portion of trail. Tim turned at the top of Mather, went back to camp and backpacked all the gear the 3 of us left behind back out of the trail. Such a legend.

Josh and I came into the Kearsarge Lakes area around 7pm in a moment that will forever be known as the Kearsarge Kerfunkle. There was miscommunication with the crew on where to be posted up. My bonked mind was expecting to see everyone and have a warm meal and sleeping setup laid out at the first junction, but there were 3 along the way. After running back and forth for about 15 minutes I finally gave up and laid down in my emergency bivy at the first junction as I waited for Josh to top out Glen Pass. I sent out inReach texts to the crew on my location but poor sky connection made them take forever to go through. I was mentally preparing to do the final 32 miles to the summit of Whitney solo on whatever food I had left in my 20L pack. Just as Josh came down to the junction my inReach buzzed and I learned the crew was at the lowest junction. There we found the largest crew of the journey. Austin, Alex, Brendan, Julia, Reece, Cody had all backpacked in from Onion Valley campground to meet us here.

Before all of this commotion, I was in a very deep sleep deprived hole but the adrenaline from the uncertainty had me wide awake when Josh and I finally found the crew at 8pm and it took nearly an hour before I could finally fall asleep.The crew woke me up at 10:30pm. 1:30 of sleep. That is all I decided I need to make this final push. My legs were gone and I felt like I had contracted some kind of head cold. Congestion, coughing, flemmy, headaches. I scarfed down 1000 calories of some mac and cheese, Austin gave me leg rubs and coffee and all of a sudden I was able to get up and feel like a million bucks. I thanked Josh for his pacing duties the previous day (actually still the same day), said bye to the rest of the crew, put on a new pair of shoes, and headed out at 11:30pm with Austin, Alex, and Brendan to tackle the final 2 passes - Forester and Whitney.

I immediately felt terrible climbing Forester in the night but Austin knows how to keep the vibes up and started blasted some tunes. We apologize for waking up any campers on the pass. The descent off of Forester was unnecessarily long, winding, and mellow. Time moved slow until sunrise. Here I hit 200 miles on my watch and felt a wave of disbelief and transparently awe at myself. I started sprinting off and the rest of the boys followed (I say sprinting but really we were running 10 minute miles). I could not believe how good my legs felt through the undulating, rolling terrain. No wave of joy lasts long out there is what I came to realize and I was quickly hurting again. At this point we were at about 205 miles and I knew we had a 4000ft climb to the summit of Whitney and nothing else. The group split into Austin and myself, and Alex and Brendan. Austin is my life-long best friend and suffer-buddy. We have been in situations like this a lot. We looked at each other and decided we were going full send to the summit once we hit Guitar Lakes. I was running on pure adrenaline (and caffeine pills, 5 hour energy, red bull, copious amounts of tylenol and ibuprofen, and caffeinated Gu) and felt the best I felt on any climb.

I finally topped out Whitney at 14,500ft on 10:47am on Sunday August 15. 3 days, 10 hours, and 32 minutes after I started at Happy Isles in Yosemite Valley, beating my goal time of 3 days and 12 hours by 88 minutes. Absolute death march down Whitney, which took an additional 4.5 hours with a busted shin by me and a rolled ankle by Austin. Must have been a joy for hikers to see.