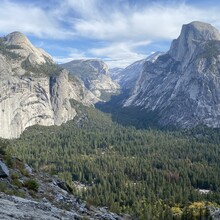 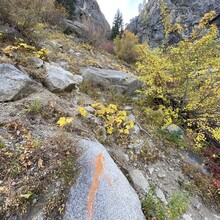 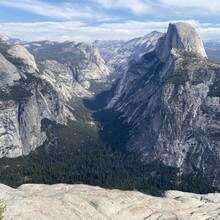 Yesterday I had a go at the El Capitan TH-TH FKT, and so today I was looking to do something less 'running' heavy in the valley. The Ledge Trail had been on my bucket list for some time, and I thought that this would be perfect!

I started at the "Camp Curry Welcome" sign in Curry Village, and headed straight south towards the Glacier Point wall. I had read of several different starting points, some being more wooded, some being looser, and some being further towards the Trailhead Parking. I picked the obvious path visible from afar that was cleared of trees and led straight up. After some time I reached the Glacier Point wall and started angling up and right essentially hugging the wall the whole way. Here I finally started seeing remnant paint markings from the Park Service from back when this was an official trail, which was really neat. Staircase Falls was completely dry, and the only water I encountered was a tiny trickle close to the valley rim, but I had brought some water with me anyway. When I reached Glacier Point I was reminded of the stark contrast between the Ledge Trail solitude and the crowded Glacier Point lookout.

I completed the "Up Ledge, down four mile loop" route option, but this is the ascent only portion up the Ledge Trail. The ascent can go a lot faster. I burned several minutes on the way up enjoying the view, snapping pictures, and making sure I was on the best route. While I haven't found any faster posted / recorded times up the Ledge Trail, I would not be surprised if there have been faster ascents. Regardless, it's a worthwhile route to get on the site and I look forward to seeing who gets after it next!