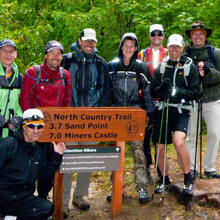 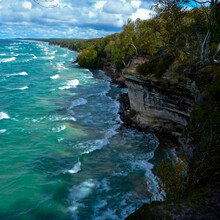 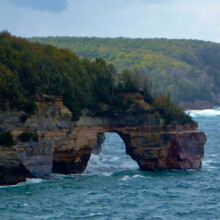 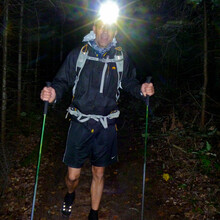 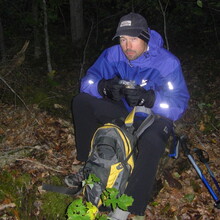 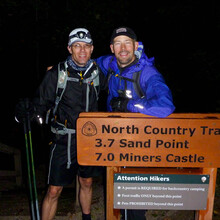 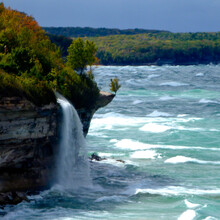 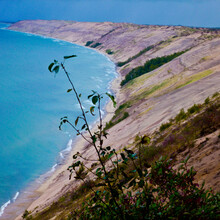 My buddy Morgan Anderson and I stumbled out of the woods just as the sun was setting.  We were dripping with sweat, our feet were blistered, our bodies were sore, but our pride was glowing.  We had just hiked the entire Lakeshore Trail at Pictured Rocks National Lakeshore in 14 hours.

At 42.4 miles it was my first really long day hike.  As we posed for our victory photos at the trailhead sign, I turned to Morgan, completely spent and joked, “how much would I have to pay you to turn around and walk back to the beginning?”   We both laughed and quickly dismissed the idea as impossible.  The year was 2003.

Fast forward nine years to September of 2012.  Weeks away from turning 40, I decided it was time to attempt the impossible.  Now I had experience on my side.  I had completed four monster day hikes that were 22+ hours long and rated as multi-day backpacking trips.

These monster hikes always involve hours of suffering.  Your feet hurt, you feel horrible, you lose your appetite, you’re exhausted, and you have an overwhelming urge to give up and go home.  “Why do you do this?” is a question that I’m often asked.  As I approach 40, I guess I wanted to see if I still have “it,” whatever “it” is.  I enjoy pushing myself to the brink physically and mentally.  Pushing through the pain and succeeding is very rewarding.

Seven months before the “yo-yo” (a there and back hike) at Pictured Rocks, I assembled the strongest crew I had ever hiked with.  They included collegiate runners, Ironman triathletes, and several guys that had completed extremely long hikes.  My buddy Heath Kaplan, one of the best support guys in the business, also signed up.

On September 22, 2012, at 8:38 a.m., we started from Munising Falls, eight hikers strong.  Our pace was quick despite the cold temperature and rain.  High winds whipped us around as we danced over tree roots and tiptoed across exposed sections of cliff that were perched several hundred feet above an icy Lake Superior.   Loud booms startled us as the turquoise-colored waves slammed into eroded caves at the base of the cliffs below us.

Nineteen miles into the adventure, Mount Pleasant attorney, Todd Levitt, injured his foot and was out.  Next to drop was Pete Bultema Jr. at 31 miles.  Isabella County Assistant Prosecutor, Mark Kowalcyzk, and Gabe Garcia threw in the towel at mile 37.  Ryan Leetsma and Jason Schuringa both dropped at the half way point, 42.4 miles in.

My buddy, Eric Carlson and I mentally prepared for the inevitable pain and suffering and pushed on into the night.  We trudged, hour after dark hour in the small bubble of light that our headlamps cast ahead of us.  Somewhere around 3 a.m. I got nauseous, my mind started to dull, and I was unsteady on my feet.  As the minutes clicked by, I felt worse.  My hip and knee joints were killing me and I couldn’t force myself to eat.

As we approached the Au Sable lighthouse, we entered a large clearing.  Despite the incessant rain and clouds during the day, it was now completely clear.  The stars were abundant and bright.  Without a word, we both stopped walking and just gaped up at the sky.

When we reached the checkpoint at 12 Mile Beach, it was 5:30 a.m. on Sunday morning.  At 54 miles in, we faced the crux of the challenge.  While most of the hiking sections between checkpoints were 3 to 6 miles long, this next one was 24.  We would be on our own, with no way to quit or get help for 9 hours.

We sat in the support vehicle eating, drinking, and repacking our backpacks.  I was wet, sore, and completely exhausted.  We didn’t talk.  All I could think about was how much I wanted to be done.  I blocked out thoughts of the comfortable bed waiting for me at the house we rented.

It’s at this point in the hike when the internal war is waged between comfort and commitment, pain and resolve, and pride and logic.  Do I want to feel good now or feel good about myself later?  The choice sounds easy until you are struggling to make it.  I’d planned, trained for, and thought about this hike for seven months.  I simply could not quit.  So I swallowed a handful of ibuprofen pills and with as much enthusiasm as I could muster said, “let’s do this!”

Around 7:30 a.m. Sunday morning, the sun came up.  Surprisingly, I felt great.  The light tricked my brain into thinking I had gotten a full night’s sleep.  Even with my renewed energy, the last 31 miles were a blur.  Eric hallucinated.  He saw buildings and bridges that weren’t there.  When we finally hit the last mile both of our minds were mush.  We had been at this same spot the day before but it seemed like a week ago.  Nothing looked familiar.  We thought we had missed our exit trail but we hadn’t.  We backtracked.  We studied maps.  We screamed in frustration.  We ached to be done.

As darkness closed in, we stumbled out of the woods completely shot, physically and mentally.  It was 8:00 pm Sunday night.  We had hiked over 85 miles [189,470 steps according to our pedometer] in under 36 hours without sleep.

We accomplished what I once thought was impossible. Many people still wonder why we do this.  The challenge and pride definitely play a part. Society has become conditioned to think that the easiest and most comfortable way is the best way. I disagree.

It isn’t always understanding why we voluntarily put ourselves through such suffering, but Ultra-runner Dean Karnazes offered some insight when he explained “there’s magic in the misery.”

Our support person drove to different point where the trail comes near the road and provided food, water, headlamps, etc.

As this was 2012, none of us had Strava, a smart watch, a GPS, or any other way to record the hike although there are, of course, many witnesses (the 6 hikers that quit and our support person). I did post up a video trying to entice people to join us months ahead of time so I did publicly announce our intentions although I was not even aware of the FKT stuff when we did this. I've also submitted the video I made as another form of proof that we completed it.

Many people have run this route as a point-to-point one way. I have not heard of anyone else ever doing the out and back. However, if you add this to your website, I'm sure that there will be people interested in repeating it. The trail is spectacular.