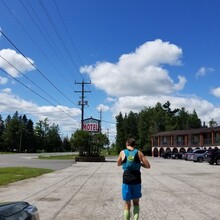 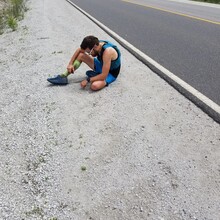 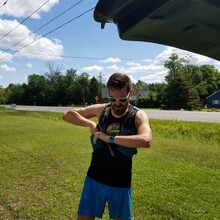 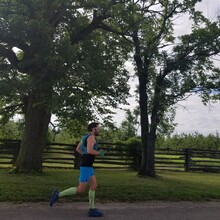 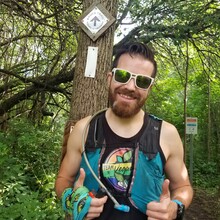 I took off from the northern terminus near Cheltenham Badlands, and things were more-or-less smooth sailing and joyful for the first 30k or so. I stopped for a few minutes after 22k at the Cedar Springs Motel where my wife was waiting as my one aid station with everything I needed to refuel, and then took off again. At some point around 30-32k I came to a narrow pass where a woman who in retrospect must have been having a terrible day and didn't want to be out there completely unloaded on me with a barrage of explicit insults for asking if it was possible to pass by. I tried to let it roll off my back as I patiently waited for her to pass through, but once two other members of her family joined in, I couldn't hold my tongue any longer and responded in kind calling out there ignorant rage when I happily complied with their request. I went on, and fortunately there were no real issues beyond that, but unfortunately I couldn't shake the interaction from my mind. I had let them get under my skin, and my performance was suffering. Mentally I was out of it, but still physically moving forward. With about 4 or 5k to go, a group of 3 spectacularly kind hikers chatted with me for a bit and donated some water to the cause, renewing my faith in humanity. I made it to the southern terminus just past the highway underpass near kelso in 5:14:35, and slumped to the ground.