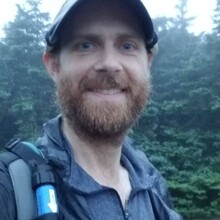 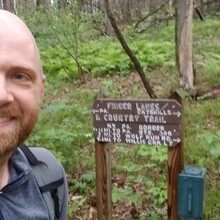 On June 20, 2021 at 6:17am, I, Ryan "About Time" Levering started a self-supported thru-hike of the Finger Lakes Trail. (fingerlakestrail.org)  I was originally attempting a 20 day thru-hike, but because of injury problems (blisters/tendon problems) lost a couple days.  There is no registered FKT of this hike but the unofficial fastest time from when the trail was shorter a number of years ago was 23 days so my goal was to at least do it faster than that.

I traveled from the eastern terminus in Alleghany State Park to the western terminus on top of Slide Mountain in the Catskills in NY.  This trail is somewhat unique in that there is a very large percentage of the trail that is rerouted during hunting season (like during May).  I hiked it during June to avoid any reroutes.  There were several sections on the whole trail that were temporarily rerouted during my hike but it was a small percentage of the overall miles.  I followed all guidelines from the FLT conference, the trails managing body (FLTC) with regards to trail correctness to the best of my ability (obeying posted signs and blazes).  I believe the total official mileage of the trail is a bit less than 580 miles at the time I attempted it.  My GPS data totals more than that due to mistakes in following the trail and detours for food/sleeping.

I used mail drop resupplies at several post offices and motels.  No one I knew before I started hiking helped me in any way during the attempt or was present except to pick me up at the end.  I stayed at one trail angel's cabin that I did not know that offered along the way.  The majority of my sleeping was at bivouacs and shelters, all at legal locations (for instance on state land).  I carried my backpack the entire length of the trail.

I wore a Garmin Forerunner 935 and recorded each day from start to finish and shared on Strava.  I have photos and videos from the trail.  I signed every trail register that I passed (there are probably 50-60 on the trail).  There were very few actual people on the trail, I probably only saw 20 hikers that were not day hikers in popular tourist parks (like Watkins Glen).

I have been recognized as completing the trail E2E by the FLTC with E2E #499.