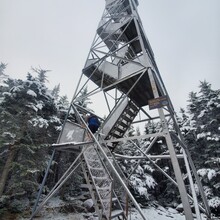 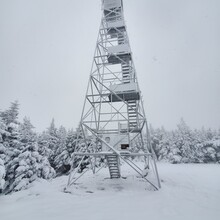 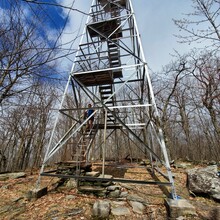 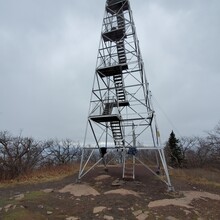 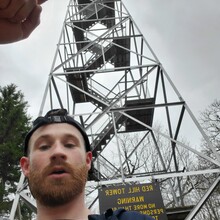 As standard all towers climbed to the top and all trail register books signed into and out of. Only Tremper wasn't locked at the very top of the tower.

Nickita handled all the logistics for the drive and we ended up with just under 2:15 for the 94 miles of driving between towers. *Disclaimer* Having the drive between towers contribute to the overall time really does tend to provoke reckless driving behaviors and as such we had mixed feelings about it.

We pulled into the trailhead lot for Balsam around 6:30 and in typical form we shook off the sleepiness, ate some overnight oats, prayed the snow would pass, and reluctantly stepped out of the car 20 minutes later. 6:54 am and we were off and powering up towards Balsam's Tower. The trail tended towards an access road style and the going was fast on fresh legs! Before we knew it we were scampering up a rime ice cover tower and claiming the first of the day. Strong but manageable pace on the descent safely dropped us back at the FKTAXI for some PB&J, nuts, water, and a 38 minute drive over to Hunter. We wasted no time and Hunter. Backed into the lot and the hit the trail hot! Hunter was GRUELING nonstop climbing combined with a wet snow getting progressively deeper from around 2200' up to 4000', but this was what we were here for so we pushed through. The 0.35 mile side trail to the tower was covered with 3-5 inches of nice fresh powder which our uncovered legs and ankles didn't love all that much. After getting off the tower we hurled ourselves down that beast of a mountain at a pace that varied from sketchy to full on recklessness. Once again we find ourselves back in the car eating, drinking, and scheming on our next drive this time only a few miles away. On the way to Tremper I made a mistake and ended up on the wrong side of the river, luckily Nickita finessed us back across and into the lot without losing much time, proving himself to be a fine Co-Pilot. Tremper felt like a different world. Not a drop of snow, sunshine, and a nice breeze carried us steadily upwards until we were staring down our 3rd tower of the day. Tremper's crows nest was open and we sat up there for a little bit and seeing the first good view of the day, the scale of the task at hand started to materialize and it gut checked me a little bit. No time for thoughts today, so we took it all in and as Nickita would say "we jived and danced our way back down." More car time, more PB and J, and more fatigue settled into our legs as we scooted over to Overlook. We were worried about overlook parking as it was now mid day and this is the highest traffic tower by a lot. We ended up waiting 8 minutes before we could arrange a spot swap with some folks leaving. Shouts out to you whoever you are! This is where things got real. We knew if we didn't push hard here then our odds were long of beating the time. The carriage road up to this tower was a godsend. For the first time since Balsam we could actually run at a steady cadence. SO MANY PEOPLE. At times it felt like weaving through a traffic jam, but we were here for the record so we dealt with it as it came. Once more we scurried up the tower, turned tail and let the slope pull us back down to the FKTAXI for our last drive. More miles, more food, more foot ventilation, and 55 minutes later there we were at the Red Hill trail head. Nickita and I dragged ourselves out of the car and immediately realized how cruel that last drive was to our legs. We resembled two baby deer trying to walk for the first time as wr made our way to the last trail register. We had 50 minutes to be back at the car so off we went the fastest slow dudes you'd ever see! Push, push, start to bonk, push harder and there we were at the last Fire Tower. It was somewhat surreal ( the delirium from calorie deficit amplified the feeling) and looking at the watch we had 30 minutes to get back to the car. My nerves were palpable at this point...did we really suffer all those climbs, push that hard for that long to wind up missing our time cutoff?! Again, no time for thoughts we have to finish. The trail on Red Hill was nice and tight which is a huge change coming from the others of the day so it took some effort to get the body moving faster and faster as we descended. It's over. 9 hrs and 36 minutes from when we started it was all done. Idk how to feel about these kinds of effort still.... maybe it's a bit of pride, of validation that we can accomplish huge tasks through persistent work, or maybe it's just some endorphin chasing transcendent desire, but all I was sure of was that we needed to get to New Paltz for some Mexican Kitchen and more importantly some Ice Cream!