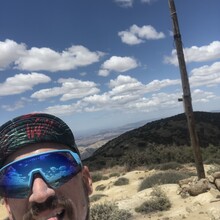 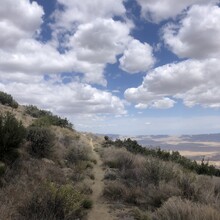 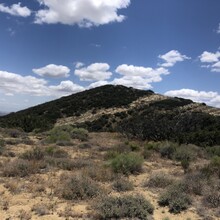 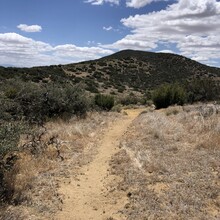 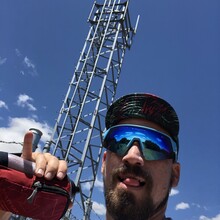 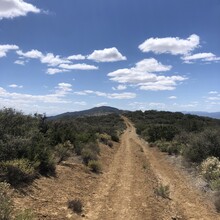 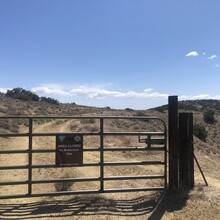 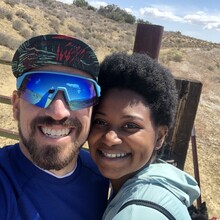 My first attempt at an FKT was this Cailente Mountain Ridge Trail! The drive up had me expecting something a bit drab but the rolling hills and change in terrain was surprising and addicting. Just under 2.5 hours and right about 17 miles. The weather had me a bit confused. Very clear day at about 60oF. I expected the exposure to bake me but the cool breeze kept me cool and even kept me at one 24oz water bottle. Started at the gate as directed. Couldn't decide how fast to do the first half. After a few rolling hills I got into my groove (that zone 4 HR that I've been trying my hardest to avoid in training). That groove got even better when it turned from dirt road to single track. Got some encouragement from a group of backpackers. Cruised on until about mile 6.5 then started prepping for the summit. The last few hills roll in favor of the summit and so things slowed. By the time I reached the top I realized the clouds had come out making for beautiful views over California's largest native grassland. Trail was nearly impossible to mess up but I decided to mess it up at the summit where I was staring at my GPS instead of the trail in front of me and thought I was off track so I did a little circle, stared at the rock landscape in front of me, stared at the obvious trail I left, did another little circle and decided to get back on trail.

Calling this one Supported since my fiance was there with my two pups at mile 0.0 and mile 17.0! Happily respecting FKT's new guidance. I couldn't do runs like this without these three in my cheering section.

Recommendations: Google Maps will tell you that you can get to the trail parking from hwy 166 on the southwest side. Notice the "private roads" caution. The roads are very closed and very private. Drive up from the north east side! Doesn't seem to be any water in the area! A visitors center even cautions that there are limited services. I'd recommend running the first half way faster than you'd expect (disclaimer: starting too fast is my biggest weakness BUT...) The rolling hills will suck you along amazingly well. Pretty much treat it as a proper out and back and not as a summit. Sure the last mile and a half is way more up hill but take that as it comes. As always when descending keep your wits about you. The down hill rolling hills can suck you into moving pretty fast.

Looking forward to defending this one!